Investing in coffee and the Congo

Investing in coffee and the Congo

The Democratic Republic of Congo needs investment to rebuild from decades of war. But the cruel irony is that it’s the last place many foreign investors want to park their money.

Konrad Brits is trying to be one of them. He is CEO of Falcon Coffee, a U.K.-based green coffee supplier to brands all over the world.

He stands before the coffee processing mill that he helped finance in Goma, the capital of DRC’s North Kivu province. The mill processes coffee beans provided by cooperatives and farmers from around the region. He hopes it will provide a desperately needed source of revenue for people.

“It’s an incredibly risky investment, or a lot of people would view it as that,” he says.

After what Brits has been through, it is a miracle he is here.

This isn’t his first ride on the Congo Coffee train. Ten years ago, he tried exporting coffee from the other side of the country. He set up a network of middlemen to buy coffee from villages, and then processed it in a factory like this one. He imported everything from screws and screw drivers, to cars and machinery and equipment.

“And once we started the process, the shackles began to tighten,” he recalls.

Taxes got pushed mysteriously higher, and higher, he says. And then there were random fees, like for the government to certify the weight of his coffee (even though officials had no scale).

Brit’s staff was stealing 2 tons out of every 18-ton container “in conjunction with the port authorities,” he says. “I was paying the tax and buying the 18 tons of coffee and buying the weight note; shipping thousands of tons. And when they started arriving, my buyers would tell me, ‘You over-invoiced me. There’s only 16 tons.'”

The staff were then reselling the stolen coffee back to Brits.

“The degree of institutional corruption made me realize that I needed to cut my losses and leave,” he says. He lost $1.3 million.

At the time, he was furious that so many people and authorities around him had colluded to cheat him at the expense of their own communities.

“I’m going to leave here,” he says he told a group of officials and employees. “I’m bleeding, but I’m gonna survive, I’m gonna take my business somewhere else. And you’re gonna sit here with no future.”

Since that time, Brits has come to think about his experience in a different way.

“Time and again, the Congolese have seen so many foreigners come and go, and by and large every one of those foreigners have been there to take not to give,” he says. “Starting with slavery and everything else: the mineral wealth, the rubber, the hardwood. Investing in the DRC with my very developed-world, bleeding-heart attitude, believing I could deliver this promise of tomorrow to people who had been nothing but let down.”

So why is he back?

Menelas runs the coffee mill. He was here when rebels swept through town just two years ago, leaving bullet holes in the gate of the mill’s compound. Menelas has been here 30 years, through wars and invasions and corruption. Brits says he trusts Menelas and his family.

“They have built up a huge coffee-export operation out of Uganda for 15 years, and we’ve been partnering with them there for the last five,” he says.

The only way to survive here, says Menelas, is to know people who know how to survive here, and find partners who have a stake in your success. Konrad’s early experiment had him depending on people who would gain from his failure. Also, it doesn’t hurt to have an edge.

“In business, if you show up somewhere and don’t know anyone and nothing, you’re a sheep among lions. They’re obviously going to devour you. So you have to become a little bit lion,” says Menelas.

And as a businessman, Menelas takes the long view.

“Our parents, they lost their things two or three times. Us too. You get used to it. The positive thing about Congo is you can lose for two or three years and then gain it all back and more,” he says.

Brits takes the long view too.  He says his partners, who’ve invested more than he has, make him feel protected. This time, he says, will be different.

“Well possibly,” he adds with a laugh. “Maybe I’ll be a fool twice. We are yet to see.” 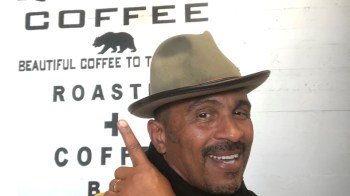