There is no shortage of stories about Detroit’s resurgence – stories like this one, this one and this one. Most of them focus on downtown Detroit and its nearby neighborhoods, where newly arrived young professionals live, work and shop.

But there’s a neighborhood on the far northwest side of Detroit — about as far as you can get from the slickly made-over downtown, literally and metaphorically — where residents are trying to build a local economy around their only real assets: vacant land and committed neighbors.

Nicky Marcot, left, and Gavin Buckley helped spearhead the effort to buy this vacant building. They hope to turn it into a community kitchen and business incubator for their Detroit neighborhood.

Fenkell Street is the main drag through this somewhat notorious neighborhood, called Brightmoor.

“This block here has been sort of a black eye on the neighborhood for a long time,” says Harry Reisig, of Neighbors Building Brightmoor. He’s standing in a vacant building on Fenkell Street, next door to Ronnie’s Liquor Store, where it’s not uncommon for people to hang out outside all day and watch the prostitutes ply their trade.

Reisig and some of his neighbors bought the building next to Ronnie’s for $18,000 at a tax foreclosure auction last month, with money raised from a crowd-sourced campaign. The plan is to turn it into a community kitchen, where people from the neighborhood could buy a membership, maybe pay an hourly fee, to can tomato sauce, pickles or other food products to sell — both from the storefront, and elsewhere in the city.

The kitchen is the next logical step in creating a local economy based on food.

“We have 50 percent vacant land here in Brightmoor,” says Joe Rashid of the Brightmoor Alliance, a non-profit that does community and economic development work here. “We have to figure out how to put that land into productive use and create jobs off of it.”

Neighbors have already reclaimed a lot of the vacant land here, for gardens from which kids grow and sell produce. There are hoop houses, a co-op greenhouse, even a little goat farm. There’s a maple syrup operation, and a guy who sells shares of his home-brewed beer.

“Having a value-added product and having something that can actually create jobs in the neighborhood is the No. 1 priority,” says Rashid.

Neighbors are meeting over the winter to iron out their business plan, and they expect the kitchen to open for business in the spring – provided some money comes through to do things like fix a hole in the roof and get the kitchen fully functional.

“Ultimately this is really a tool for community for self-empowerment,” says Reisig. “If someone has a catering business and they need [the kitchen] 10 hours a week, awesome. If someone has tomatoes to can and they need it two hours, awesome.” He says the group eventually hopes to employ a kitchen manager, and a business development manager to help incubate other businesses. There are also plans for a café in the front of the building, where kids from the neighborhood could get work experience.

Rashid says one reason he thinks this thing is going to work is the can-do attitude of the folks who live here.

“There’s a motto in Brightmoor,” he says. “‘We do everything with you, we do nothing for you.’” 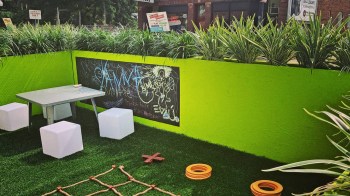