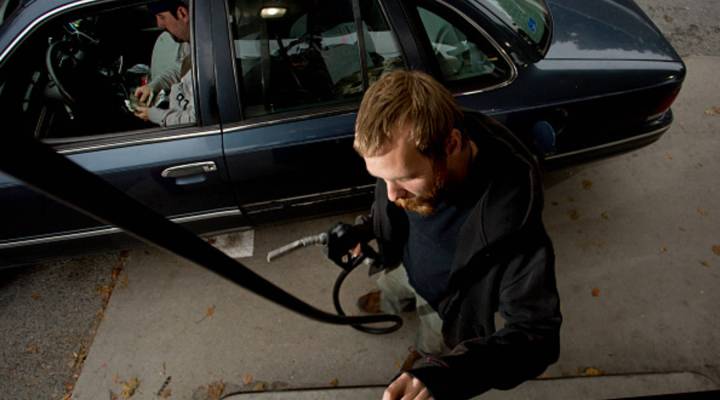 In a surprising reversal from previous forecasts, the U.S. Energy Department is now predicting that the average price of gasoline will remain below $3 a gallon next year.

That’s a 44-cent drop from its previous outlook, and especially good news for the working poor since the vast majority of workers (both above and below the poverty line) commute to work by car.

With gas now selling for $2.85 a gallon at a gas station just outside of Ann Arbor, Michigan, Jesse Foster says he’s paying $10 less to fill his tank than he was even a few weeks ago.

“Yeah, it’s a lot of savings,” says Foster, “because I drive a Suburban. So it’s real good news.”

It’s particularly good news if you work for minimum wage. Since poorer commuters spend a greater percentage of their income on gas, any relief at the pump creates a ripple effect of benefits.

“Which might mean that you don’t run out of healthy foods,” says Margaret Simms, director of the Low-Income Working Families Project at the Urban Institute. “It also means that maybe you can pay a bill that you had to skip this month because you had to put gas in your car.”

Simms also points out that any data the government has on commuters treats both low- and high-income drivers the same, which might present a false picture since many low-income workers drive less fuel-efficient cars.

The Energy Department projects that gas prices will continue dropping for the remainder of the year, with a national average of $2.80 a gallon expected for December.

The Crude Economy
Tags in this Story
Share this Story