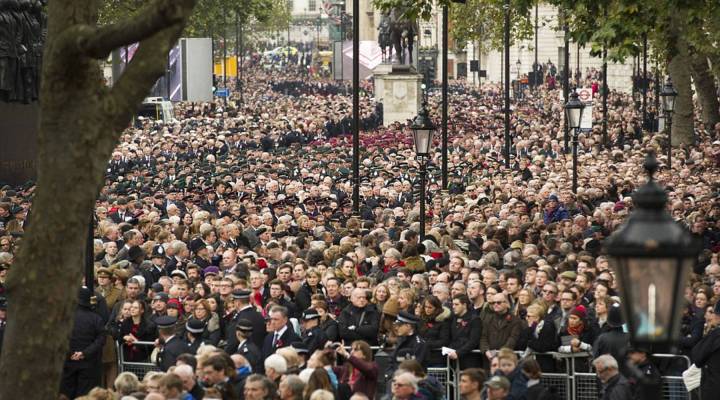 COPY
All these people came to London to see a work of public art.
Marketplace Whiteboard®

All these people came to London to see a work of public art.
Listen Now

London has gone poppy mad. Many people, throughout the UK and Ireland, wear poppies at this time of year to show their support for veterans and their families. So it’s not uncommon to see glimpses of scarlet everywhere; on business suits, overcoats, sweaters and even T-shirts. This year, though, the poppies that are really attracting attention are on the ground, filling the moat of the Tower of London, in a display of 888,246 ceramic flowers, one for each British or colonial fatality of the first world war.

The display, called “Blood Swept Lands and Seas of Red,” has been a money-spinner for charities, which will raise as much as GBP15 million ($23 million) from the sale of the two-foot tall poppies. The drive to raise money around the event knocked even the most successful Kickstarter campaign into a cocked hat, raising GBP2.5 million in just six days.

The poppies have also been good for London. Again, estimates vary, but news reports from the capital said as many as four million people, mostly from other parts of the UK and Ireland, have visited the Tower to see the display. The poppies have been such a resounding success that the exhibit is to go on tour: 10,000 poppies will be displayed around the country before they become housed by the Imperial War Museum.

The enormous display didn’t cost the UK government or the City of London a penny. The thousands of people who hammered the flowers into the moat were volunteers. The flowers sold for GBP25, 10 percent of which will go to six service charities: Combat Stress, Coming Home, Help For Heroes, the Royal British Legion, SSAFA and the Confederation of Service Charities. All net proceeds from the sale will also go to those charities, and the government said recently it will waive the tax bill resulting from the sale of the poppies. UK Chancellor George Osborne said the government will make up some of the cost with GBP500,000 in LIBOR fixing fines collected from banks.

Best of all, the installation has been good for art. It has shown that great works of art don’t have to be static or permanent; they can be broken up and bought by the public; they can be successfully sponsored, and they can be of enormous benefit to society. How many other works of art in London get four million visitors in a quarter? And how many have the kind of impact that Blood-swept Lands and Seas of Red has had on those who’ve visited it? Millions of children have learned something about the history of their country, and probably their family, that they might never have otherwise known. The fact that they learned it for free is a bonus for the government. And it’s a lesson, too: art can be a good investment, not just socially, but financially. Which is why governments should work hard to fund and promote their countries’ artworks whenever possible.