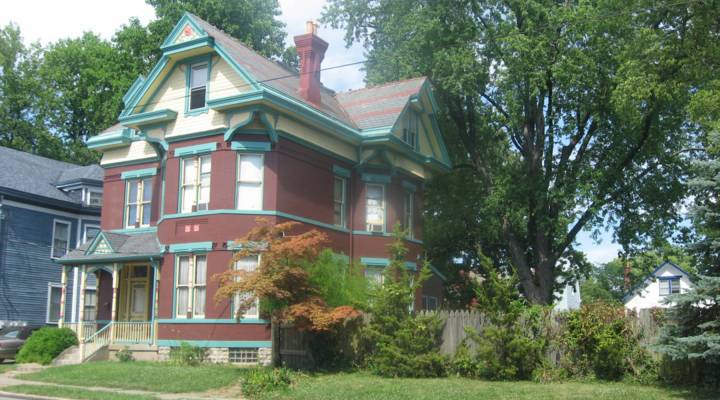 COPY
A house on Beech Avenue in Cincinnati, Ohio.  In Cincinnati's East Price Hill, Ken Smith runs a community development corporation Price Hill Will. Their community development work includes buying neglected buildings that are unattractive to investors, and rehabbing them into beautiful homes. Smith shows me a stately yellow two-story on Beech Avenue. "The street has a lot of potential, and has a lot of investment," he says. Wkimedia Commons

A house on Beech Avenue in Cincinnati, Ohio.  In Cincinnati's East Price Hill, Ken Smith runs a community development corporation Price Hill Will. Their community development work includes buying neglected buildings that are unattractive to investors, and rehabbing them into beautiful homes. Smith shows me a stately yellow two-story on Beech Avenue. "The street has a lot of potential, and has a lot of investment," he says. Wkimedia Commons
Listen Now

For 25 years, Kathi Cobb has lived in Cincinnati’s East Price Hill, on a block packed with wooden frame houses and miniature lawns.

“We all went to the same church. The kids would play outside,” she says. “It was more of a neighborhood.”

Then came the housing crisis.  The Cincinnati Enquirer used a nearby block to tell the story: “First came the ‘For Sale’ signs, from one end of his East Price Hill street to the other, as investors and long-time residents tried to bail out of the crashing real estate market a few years ago. Then came the foreclosures, more signs, more foreclosures and, finally, the exodus.”

“I don’t think anybody’s in that one. And there’s nobody in that one,” says Cobb, pointing to houses across the street. “We’re the only ones left.”

But now there are signs that East Price Hill is entering a new, uncertain phase. A California-based real estate investment trust called Raineth Housing bought the house across the street. It’s one of more than 230 in the city that Raineth intends to turn into a rental.  Elsewhere in the city, more than 1,000 houses have been purchased for the same purpose by much larger companies, American Homes 4 Rent and American Residential Properties. They all represent a trend over the last few years called “REO-to-rent,”  in which investors buy foreclosed properties and turning them into rentals.

“The way the institutional investors think of this is: ‘What is the most attractive investment I can put in my portfolio?'” says Laurie Goodman, director of the Housing Finance Policy Center at the Urban Institute. “And when home prices fell to very distressed levels they were able to buy up properties, rehab them and rent them out and achieve a very attractive return on their investment.”

Investors capitalized on their ability to buy cheap houses, but to rent at relatively stable market rates.  “Rents are much more stable than property values,” says Doug Bendt, director of mortgage-backed securities research at Deutsche Bank. “Throughout the recession, on the national level properties values fell by about 30 percent;  rents fell only a few percentage points.”

Some investors also see this as a long-term trend. “The combination of falling home prices, limited mortgage credit, continued liquidations, and better rental options is fundamentally changing the way Americans live,” an influential Morgan Stanley report in 2011 said.”We believe this change is only beginning, and is moving the country towards becoming a Rentership Society.”

In the last few years, this prospect has attracted  institutional investors including hedge funds, private equity firms and real estate investment trusts. Together they have spent billions of dollars on single-family homes with the intention of turning them into rentals. The largest six firms alone have spent $18 billion and purchased more than 115,000 homes, according to analysis by Deutsche Bank in August.

Questions have been raised about how effective this industrial landlord approach is, often in reference to Invitation Homes, an entity created by private equity firm Blackstone that is the largest player in this market, with more than 45,000 houses.

“It’s important, though, not to lose sight of the fact that this is a very small proportion of the rental stock,” says Goodman. “Just to put this in perspective, over the last six years  something like 4.5 million homes have been converted from owner-occupied into rental properties, and the institutional investors have maybe purchased 200,000.”

In other words, the vast majority of the new  single-family rentals are owned by much smaller-scale investors.

In Cincinnati’s East Price Hill, Ken Smith runs a community development corporation Price Hill Will. Their community development work includes buying neglected buildings that are unattractive to investors, and rehabbing them into beautiful homes. Smith shows me a stately yellow two-story on Beech Avenue. “The street has a lot of potential, and has a lot of investment,” he says.

But two blocks away, the landlord is Raineth Housing, which has bought more than 100 homes in the neighborhood. On a walking tour of nearby Raineth-owned properties, we find primarily houses that don’t appear to have been rehabbed. (Raineth says 41 of the 235 homes they have purchased in  Cincinnati are awaiting rehab.) The condition inside is difficult to judge, but the properties’ exteriors include garbage strewn across overgrown lawns and peeling paint. “It is certainly empty, with the number, looks like on a Sharpie, written on the front of the house,” says Smith of a property on Beech Avenue.

“We want others to invest in the neighborhood, bring capital to the community to help rebuild it,” says Smith. “But we know there’s good investment and there’s bad investment.”

Smith has managed property before, and can’t fathom how an out-of-state company will adequately rehab and maintain so many homes. “It’s mind boggling for me to think how one would manage that,” says Smith.

Moreover, he’s concerned that since the entire business model relies on the gap between rental price and home value, that to squeeze high returns from monthly rents, the incentive will be to skimp on long-term repairs. “Let’s face it you could put $70,000 into a home and get a certain amount of rent, or you could put $30,000 into that  home and get maybe less rent, but a better return on the 30,000 dollar investment,” he says.

“I can understand people’s concerns,” says Ed Renwick, founder and CEO of Raineth. “But from my perspective, they don’t really make sense.  So what they’re worried about is that we’re going to bring $50 million into these communities and then not care about the long-term value of the assets we bought with $50 million?”

Renwick says Raineth is spending an average of  $6,000-$8,000 to rehab the properties it has purchased in Cincinnati (purchased at prices that range from $0 to $35,000). He emphasizes the company’s intentions to provide affordable housing and bring money to the local community, and insists that even his financial incentives are long-term. “If I’m getting a 12 percent return on my asset [the return [promised to Raineth’s investors], it’s going to take me ten years before I’ve gotten repaid on the asset,” he says. “The average American lives in a house for seven years, so I’m already making a bigger commitment than the average American.”

Cincinnati will find out soon whether an investor-constrained landlord is better. Raineth aims to buy 25 houses a month here. American Homes 4 Rent, which has purchased more than a thousand homes in the city, was recently named the fastest growing housing company in the country by Housing Wire, with revenue growth of 3,000 percent in 2013.