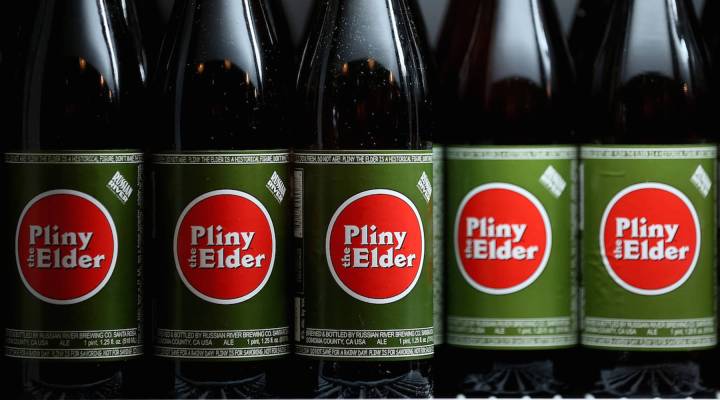 Pliny the Elder was the Roman naturalist credited with first identifying hops.

Pliny the Elder is also a beer, and, today, a case study in “scarcity marketing,” said Natalie Cilurzo, the co-owner of Russian River Brewing Company.

Despite the sparse marketing, demand for Russian River’s signature beer couldn’t be greater. Cilurzo says on weekends, their brew pub in Santa Rosa is packed.

“We usually have lines up front on Friday, Saturday and Sunday mornings before we open,” Cilurzo said. “I heard yesterday, the Google Bus was here.”

Russian River Brewing Company also sells bottles of Pliny the Elder, in limited quantities, to a couple hundred stores in California and Colorado. (The beer, by the way, is pronounced Pline-y, unlike its namesake Roman naturalist whose name is pronounced with a short “i.”)

One of those stores is Ledger’s in Berkeley. I got to to the store at 4:00 p.m., which is when I was told the Pliny gets delivered.

Turns out, the beer came early and they were already out. Aviv Gerber was one of the lucky ones. He’s 29, a bartender, and he found out about Pliny at the dog park.

“I heard it’s only here on Wednesdays, and it’s now limited to one bottle per person. And I was curious,” Gerber said.

Most stores limit the number of bottles a customer can buy because, in the past, one guy would come in and buy the whole lot and anger customers. In fact, the Russian River Brewery now delivers the beer in unmarked trucks because some fans were known to follow the trucks from store to store.

I walked back into the store and spotted Cole Yacco. He’s 32 and works there. Ledger’s is my neighborhood store and so Cole hooked me up with a Pliny. He kept the beer under the counter and out of sight of the customers.

I paid for mine and went home.

I have to say, the bottle is a little underwhelming. The label is super simple and you could easily miss Pliny the Elder on a shelf. As for the beer? It’s super dry, super hoppy and totally worth the hassle of tracking it down. Or so it seemed, says Nir Eyal, the author of “Hooked: How to Build Habit Forming Products.”

“Scarcity has this effect of making people perceive products as more valuable simply for the fact that they’re scarce,” Eyal said.

“They took a look at what was happening inside people’s brains when they were trying wine of different price points,” Eyal said.

In other words, some wines were more valuable and scarce than others. Eyal said its not that people just liked the most expensive wine.

“But their brains actually perceived the wine differently when they tasted the $90 wine versus the cheap wine,” Eyal said. “And then they didn’t tell the participants that it was the same wine all along.”

Eyal said what’s happening is that one piece of information — that something is scarce — is short-circuiting the brain. There’s also the fact that scarcity makes for a good story. Eyal said if you tell people, “Hey, this beer uses high-quality hops and is made in small batches,” nobody is going to remember that.

But if you say, “Hey, I have this crazy story about how you can buy a limited amount and can you believe it and the lines?”

That’s a really easy story for one person to transmit to the other, Eyan says. Eyal said for scarcity marketing to work, the scarcity has to have, at the very least, an aura of legitimacy.

When it comes to Pliny the Elder, scarcity is more than an aura. Natalie Cilurzo  says she and her husband considered making more beer, but that would mean taking on more debt, stress and work.

“This is always been a lifestyle venture for us, you know we’re a married couple,” Cilurzo said. And plus, “scarcity breeds demand and that’s not that by design for us.”

She says it’s been a winning formula.