A flood washes away one Colorado town’s infrastructure

A flood washes away one Colorado town’s infrastructure

One of the hardest-hit centers following the 2013 Colorado flood was the 2,000-person town of Lyons. Key pieces of the town’s infrastructure, like sewer, water and gas lines, were severely damaged. Fast-forward a year, the town is still working on a list of 87 projects ranging from park and riverbank repair to bridge rebuilding.

You wouldn’t be able to tell by taking a walk down Main Street. In the town’s busiest corridor, you can barely see signs of the flood. But almost everyone in town has a story — including Connie Sullivan, owner of the St. Vrain Market.

“We essentially lost nearly 100 percent of our inventory,” said Sullivan, who either lost or gave away food from the St. Vrain Market during the flood.

When the water receded, she found a foot of mud in her shop. With destroyed roads, water and sewer lines, many residents couldn’t even return home for two months. Sullivan said that put a wrinkle in her recovery plan.

“You didn’t have electricity and then you had to figure out when your customer base is going to be returning, and what types of products you would be able to sell even once they did return,” she said.

One big change? Lyons lost about 20 percent of its available housing — and Sullivan’s business now looks different. The town has made a big push to have more people visit and boost sales tax revenue. Her sandwich sales to the increasing number of tourists are up. Sales through Colorado’s Food Assistance — or food stamp — program are down.

“We served that niche of the community,” said Sullivan. “It’s sad to see that those customers are some of the ones that haven’t returned.”

Those residents have moved to nearby towns like Longmont or Berthoud. Some moved to outlying counties, while a few left the state.

The housing shortage in Lyons becomes apparent a few short blocks from Main Street in the Confluence neighborhood. Nearly every home on one block of Park Street is in the midst of repairs or demolition.

Lyons mayor John O’Brien points to a pile of rocks and debris. “You can see this cobble; you can see where the stream was. During the flood this became really another rivulet,” he explained.

Nearby are the remains of a home that’s expected to be bought by the Federal Emergency Management Agency’s Hazard Mitigation Grant program. O’Brien said it’s too dangerous for the homeowner to move back.

“… because we know when the next big flood comes, it’s going to come right through here,” O’Brien said.

In the weeks immediately after the flood, the first priority was to repair downed sewer and water lines. But O’Brien said the work is still far from complete, with work still needed to repair parks, streams and bridges.

One year after the flooding, Colorado’s Chief Recovery Officer Molly Urbina said it will take homeowners and businesses many more to rebuild.

“It’s not really a sprint. This is a marathon for a recovery,” she said.

While both federal and state agencies have pumped millions into repairs, Urbina said there will still be a shortfall for some communities.

“There was way more damage than there is going to be for grant funding. So the local communities have to look at their own budgets and see how this all fits. You know: What’s the gap and how do we get there?” said Urbina.

The gap in Boulder County is expected to be $56 million. To soften the financial blow, the county is asking voters to approve a Flood Recovery Sales and Use tax this November.

While there is a long list of repairs ahead, Mayor John O’Brien said a key concern is the lack of affordable housing.

“We’ll be concerned with replacing the housing that we lost — that 20 percent which was substantially damaged,” he said.

The town lost both of its two trailer parks, which held about 50 homes.

“It’s going to be difficult. I mean, because Lyons is the last best place in Boulder County it means that housing values continue to rise,” said O’Brien.

Town officials expect to hold public meetings on when, where and how to build affordable housing in the coming months. But completing the project will take years. O’Brien said flood recovery won’t be complete until everyone who wants to move back to Lyons can return home. 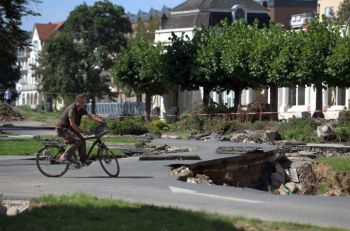