On a recent summer day, Atlantic City’s famed boardwalk was thick with tourists in bathing suits and T-shirts, crossing between casinos and a beach dotted with candy-colored umbrellas. Nelson Johnson, a local historian and author of the book “Boardwalk Empire,” stood beside one of the area’s oldest buildings, built as a hotel in the 1860s and now used as a casino.

At the height of Atlantic City, he explained, there wouldn’t have been any blank spaces along the boardwalk.

“The thought of an unbuilt piece of property on the Boardwalk in the 1920s was impossible,” he said. “It was such hot property; there were so many people walking by.”

But there are empty spaces on the boardwalk now, plus empty buildings. As the HBO show “Boardwalk Empire” (based on Johnson’s book) begins its fifth and final season this Sunday, the curtain is also dropping in real life for some of Atlantic City’s casinos — three have closed this year so far, and another will follow in a few weeks.

So, how’d Atlantic City get here?

A resort for the working class

Johnson says the city got its start with the opening of a railroad in 1854. Originally, the idea was to build a health retreat for the wealthy, though it was the working class from Philadelphia — 55 miles to the northwest — who really made the city into “America’s Famous Playground,” one of its slogans. Factory workers could come down for the day, dress up to stroll the boardwalk, and feel like they were a part of the middle class.

“So it was a booming town for close to 50 years, from the late 1870s, past World War I, and into Prohibition,” say Johnson. “Prohibition really was the zenith of this town.”

Authorities in Atlantic City ignored alcohol bans because it was good for business. The city was always a one-industry town, completely dependent on tourists — and keeping them happy.

But when prohibition ended in 1933, there was less reason to come here.

“So after World War II is really when things started to decline in terms of numbers,” says Heather Pérez, archivist at the Atlantic City Free Public Library. “The rise of commercial airplane flights made things much easier for people to go elsewhere, more exotic locations, more interesting things to do and see.”

Over the next few decades, Atlantic City began to fade; its hotels failed to keep up with their counterparts elsewhere. When the Democratic National Convention was held here in 1964, the press gave the city terrible reviews, says Pérez.

Atlantic City needed something to draw the crowds back, so in 1976, New Jersey passed a law allowing casinos here. And for a while, gambling worked.

“The first casinos opened late ’70s and there were crowds of people waiting to get into them,” says Pérez. “The boardwalk was filled with these lines and, one by one, the casinos popped up along the beach and along the marina.”

For years, Atlantic City enjoyed a monopoly on gambling on the East Coast. But in the mid-2000s, the city’s luck turned along with the nation’s economy. Gamblers abandoned Atlantic City for new casinos in the region, including Pennsylvania, Maryland, and Delaware. Casino revenues are now roughly half their 2006 peak.

About two years ago, developers cut the ribbon on the Revel, a sleek, blue-glass hotel and casino with a $2.4 billion price tag. It was supposed to help revive the city.

But last month, a customer rode down the elevator of the Revel shouting “Last time.” It closed on September 1, just a day after its neighbor, the Showboat.

Mary Thomas and her husband made a last stop at the Revel a few weeks ago. There’s a new casino just a few miles from her home in Hanover, Pennsylvania, but they still prefer to come here.

“We drive three hours to Atlantic City because we just enjoy the ocean and the boardwalk and all the shops on the boardwalk,” she says. “It’s just a nice little getaway.”

Thomas comes to gamble, too — and that’s encouraging to Don Guardian, the mayor of Atlantic City. Dressed in a sharp cream suit and bright blue shirt, he sits in his office overlooking downtown. He has big plans for the city, but he believes a large part of the city’s future lies in its roots with tourists like Thomas.

“Where you came here, it was a casino. I think now you come to a place like the Borgata, like Harrah’s, cause it’s a resort,” he explains. “So a nice room, water views, a spa, a nightclub, a theater, fun food, fine food, conference rooms and, oh by the way, gambling as well.”

Four casinos are closing, but eight will remain, and Atlantic City gets a nice cut of their gaming revenue. Guardian thinks the gambling business here will stabilize and continue to be a mainstay of the local economy.

The city’s shuffling the deck and hoping for a better hand this time. 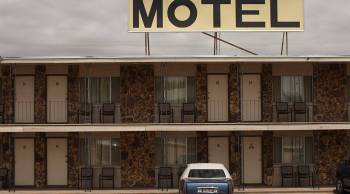