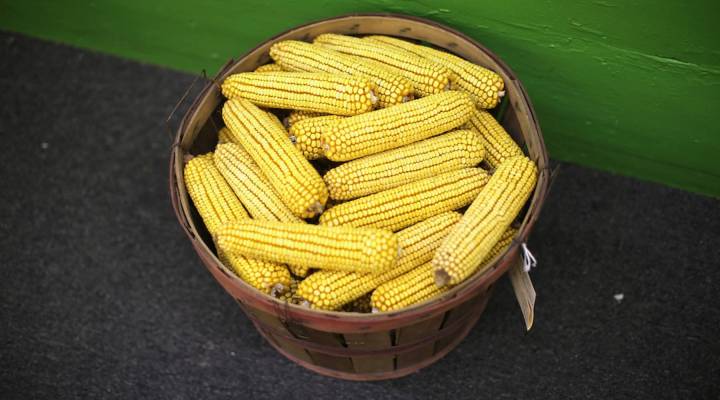 How too much corn spells trouble far beyond the fields

How too much corn spells trouble far beyond the fields

Corn is displayed for judging at the Iowa State Fair on August 6, 2014 in Des Moines, Iowa. Scott Olson/Getty Images

We are awash in corn.

Last year was a record corn production year and this year is shaping up to be just as good. Let’s explain why this acreage of corn crops can be problematic.

What do we do with all the corn we produce in general? And what about the surplus?

Most of it is being used as always: to make corn-based products, to make animal feed and to make ethanol. But the surplus that isn’t being used for those things is being piled up in grain elevators, or stored in long tubes on the ground. Farmers and buyers are having problems finding enough trucks and freight cars to get the grain around the country. All this corn is literally clogging up the system, and prices are plummeting. Corn prices have fallen by more than 20 percent over the last year, to a four-year low.

Isn’t it a good thing when cereal prices fall?

In some ways, this is great news. It will be cheaper to feed chickens, pigs and cows, and of course the price of any corn-based products will fall all as well. We’ll be able to stockpile corn for the future, in case 2015 is a bad production year. We may even be able to help other, needier, countries with our surplus.

Yep: cheap corn is good news for buyers, but bad news for sellers. Farmers who hadn’t pre-sold their grain are now finding they can’t get much money for their product. And many were already suffering because corn prices were already depressed by last year’s bumper crop.

Add in the fact that land is getting more expensive, China is buying less, there are fewer animals in the U.S. to feed, there’s a cap on ethanol production, and the cost of seed and fertilizer are holding steady, and you can see that farmers are being squeezed.

Right. There are all sorts of businesses associated with farmers that are affected. Heavy equipment manufacturers are in a particular pickle. Between 2010 and 2013, grain was scarce, so farmers were able to charge a lot for their crop. They made a lot of money and spent a lot of it on farming equipment. Which means that a) they’ve got pretty new gear and don’t need to buy replacement stuff and b) with times tight, they’re not going to want to splash out on a new tractor or whatever.

What are the equipment manufacturers doing?

They’re cutting back operations and laying people off. John Deere reckons it will have to let as many as 1,000 workers go. It is seeing weakness in Europe and South America, as well as in the U.S.

How bad is this going to be for the economy?

For the economy overall, not too bad.

Farmers have had a good few years, so the pressure on them this year won’t kill them. Some farms may go out of business, but not many. Equipment manufacturers are used to the cyclical nature of the farming business, so they won’t go under either.

But people are going to lose their jobs, and whether they work on farms or in equipment firms, those jobs tend to be in places where other work is scarce. So, a lot of individuals will likely be suffering this coming winter.