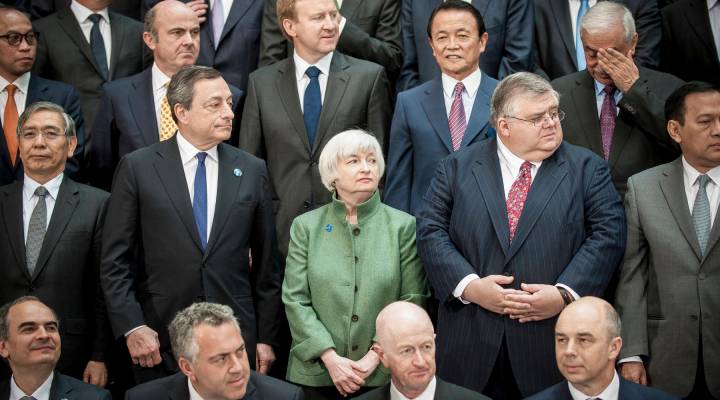 This week, Janet Yellen is the star of the show at the Economic Policy Symposium in Jackson Hole, Wyoming. That’s where central bankers from all over the world converge to talk monetary policy…and possibly fly fishing techniques.

There aren’t expected to be any major surprises from Yellen this year. The Federal Reserve is expected to stay its course with lots of stimulus and low interest rates.

“Quantitative easing” is the Fed’s now-famous policy of pumping billions of dollars a month into the U.S. economy. When the Fed first started the practice, central banks around the world voiced concern. But now Stone says Europe looks poised to take similar measures.

“Relative to Europe, we look like we’re kings in terms of economic growth,” Stone says. “I don’t necessarily feel like anyone’s saying, ‘You’ve stayed too loose too long,’ anymore.”

In fact, now Europe is worried the U.S. will taper the stimulus off too fast.

“There’s a real fear that the U.S. will raise rates more quickly and that they’ll see a money drain out of Europe,” says Michael Farr, president of investment firm Farr, Miller and Washington.

The worry is that if the Fed turns the spigot off and U.S. economic growth slows, we’ll buy fewer European goods, which would be a big blow to the struggling European economies.