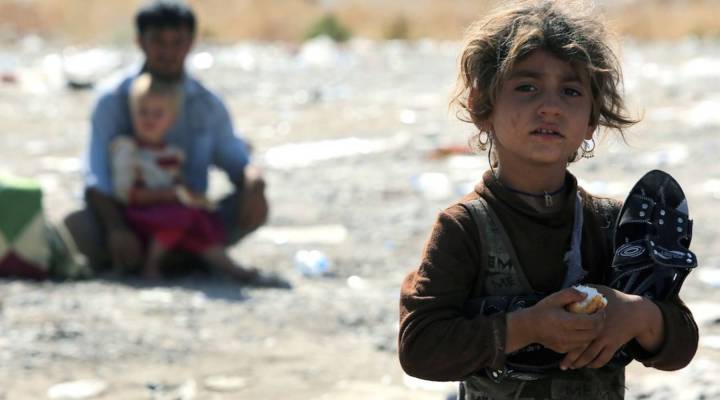 COPY
A displaced Iraqi girl from the Yazidi community holds a piece of bread after crossing the Iraqi-Syrian border at the Fishkhabur crossing, in northern Iraq, on August 11, 2014. Most of the Yazidi is out of reach for humanitarian aid workers. AHMAD AL-RUBAYE/AFP/Getty Images

A displaced Iraqi girl from the Yazidi community holds a piece of bread after crossing the Iraqi-Syrian border at the Fishkhabur crossing, in northern Iraq, on August 11, 2014. Most of the Yazidi is out of reach for humanitarian aid workers. AHMAD AL-RUBAYE/AFP/Getty Images
Listen Now

The U.S. government is reportedly weighing options to evacuate thousands of civilians from Iraq’s Yazidi religious sect, who are trapped in barren mountains in northern Iraq without food or water, imperiled by advancing Islamic State fighters. The crisis has put the Yazidis out of reach for humanitarian aid workers, who typically provide food, water and shelter to vulnerable people.

The humanitarian aid industry is growing, fueled by large-scale conflicts and natural disasters. Last year it took in a record $22 billion from donor governments, foundations, corporations and individuals. It employed more than 250,000 people.

Margaret Aguirre, the head of Global Initiatives for International Medical Corps, is one of them. The non-governmental organization moved offices recently, in part to save on rent, and Aguirre spent part of a recent day peeling layers of bubble wrap from framed photographs that will hang in her office. One, taken in South Sudan in 2012, showed a cluster of women, some with frightened children peeking from behind their backs, outside of an International Medical Corps clinic. Their homes had been bombed.

“It’s said all the time, it sounds like a cliche, but when your home is bombed, you run,” Aguirre said.

International Medical Corps’ growth mirrors the growth of the aid industry. In 1984, when the NGO started work, it was comprised of a handful of volunteer doctors and nurses who traveled to Afghanistan to treat the wounded. Now, it employs nearly 5,000 people in 30 countries and will implement $300 million in program services this year alone.

Aid work as a growing profession

There are roughly 5,000 non-governmental organizations, according to Humanitarian Outcomes, a firm that researches humanitarian assistance. The sector is rapidly professionalizing.

“You can even get masters degrees in humanitarian assistance,” said Abby Stoddard, a partner with Humanitarian Outcomes. “These could be technical specialists in water and sanitation or food assistance, logisticians, financial analysts. There’s a whole raft of careers in international humanitarian aid.”

Even so, aid work is often misunderstood as volunteer or charity work. Jessica Alexander, who has two masters degrees, and has done everything from managing camps for displaced people to working with former child soldiers, wrote a book called “Chasing Choas: My Decade In and Out of Humanitarian Aid“, in part to clear up some of the misconceptions.

As with any field, there’s even a kind of career ladder, says William Easterly, who teaches economics at NYU and wrote the book “The Tyranny of Experts: Economists, Dictators, and the Forgotten Rights of the Poor.” Easterly says he has seen a “huge increase” in the number of his students interested in pursuing careers in aid. Many of them will start in NGOs, where salaries are relatively low.

“They are small and operating on a pretty limited budget,” Easterly said. “There’s also a big phenomenon in NGOs of unpaid interns. Part of this is just supply and demand. There’s a huge amount of young people who want to work in development and that’s great, but there’s just not enough jobs for them.”

However, working for an NGO can offer young people a foothold to advance to the United Nations or World Bank, where salaries are higher.

An industry based in crisis

There is one large difference between humanitarian aid and other growth industries: An increase in the number of jobs, the amount of donations, and the demand for services usually isn’t a good thing. It means more crises.

In addition to Iraq, there are humanitarian crises in Syria, South Sudan, the Gaza Strip and across Central Africa. There is even, according to the U.S. government, a humanitarian crisis on our border with Mexico, sparked by children and families fleeing Central America.