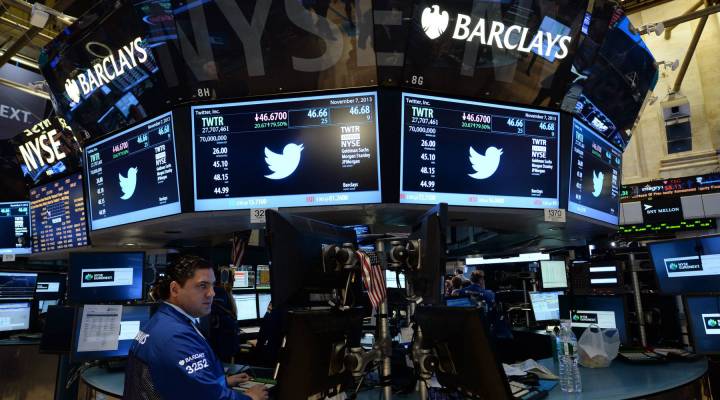 Twitter is relying on the Underwear Gnomes Profit Plan

COPY
Twitter announced a loss of $144 million in the first quarter, but also registered a 25 percent gain in users in that same period. EMMANUEL DUNAND/AFP/Getty Images

Twitter is relying on the Underwear Gnomes Profit Plan

Twitter announced a loss of $144 million in the first quarter, but also registered a 25 percent gain in users in that same period. EMMANUEL DUNAND/AFP/Getty Images
Listen Now

The social media giant says they have picked up 16 million users in the last few months, making a grand total of 267 million users on Twitter. On top of that, revenue more than doubled thanks to new types of mobile ads.

Of course, revenue and profit aren’t quite the same thing. Twitter is still losing money.

That might sound surprising, but it’s actually pretty typical for tech companies, which tend to have a business plan that strongly resembles the business model of the Underpants Gnomes from South Park.

OK, he’s actually not talking about the underpants gnomes, he’s talking about Twitter and other tech companies, which tend to follow a plan that looks something like this:

PHASE 2: Figure out some way to exploit those users.

“As habit forms and as millions of people become hooked, Twitter has an opportunity to add advertising [and] some e-commerce functions, basically monetizing the asset,” Joachimsthaler says.

But that could be tricky for Twitter. Advertisers love Facebook because it knows so much about its users and there are so many of them, says Ken Wilbur, assistant professor of marketing at UC San Diego’s Rady School of Management.

He says they don’t love Twitter quite as much.

“When you put ads into the Twitter feed itself, it lowers the utility of Twitter to its users,” Wilbur says. “And they don’t have a great platform for putting ads next to the feed.”

Wilbur says it remains to be seen whether Twitter can find a way to fully monetize its users. It could either be the next Facebook or the next Friendster. At one time, Friendster was the biggest social network on the web, with more than 100 million users and now it’s a gaming site based in Malaysia.

Ah, the pitfalls of phase two.