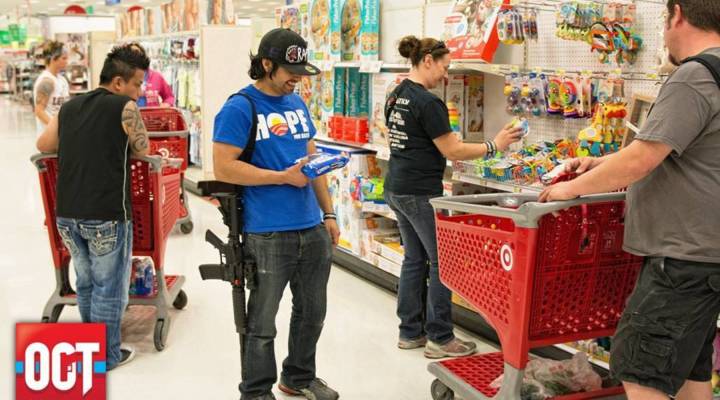 Target – itself the recent target of gripes from some gun owners – issued a “respectful request” that customers leave their guns at home. Its action follows similar moves by Starbucks, Sonic, Chili’s and others.

Companies are increasingly taking stands on a host of hot-potato issues including gay rights, contraception, and guns, whether they want to or not.

“These things can actually be forced on you,” said Neeru Paharia, a professor at Georgetown’s McDonough School of Business. “You do have to take a stand, right? You have to pick a side.”

Target was drawn into the fray after gun rights advocates toted their rifles into Target stores in Texas and elsewhere. In response, an anti-gun group, Moms Demand Action for Gun Sense in America, collected almost 400,000 signatures protesting the carriage of firearms in stores.

Target says 80 to 90 percent of its customers are women and nearly 40 percent have children.

David Sutton, CEO of Top Right Strategic Marketing, said if a company takes a political stance, that stance should be aligned with the company’s public image and private values.

“Whether it’s gay marriage or gun control, if your inner identity is consistent with the statements you’re making in public, I think you’re on solid ground,” Sutton said. “I think brands that take a stand on things they believe in – consumers appreciate that.”

Not all consumers appreciate Target’s decision. The company’s interim CEO, John Mulligan, made the “no-guns” request in a post on the company’s blog. It has received more than 2,000 comments, including some angry responses.

Paul Argenti, a professor of corporation communication at Dartmouth’s Tuck School of Business, points out that Target may have some tough decisions to make if customers insist on bringing their guns to the store.

“I think the really interesting question is: what happens when the people who are obviously going to oppose this decision start pressing the issue,” Argenti said. “That’s when we’re going to see some real action here.”