The head of American Apparel, Dov Charney, has been sacked, the board announced in a statement.

Charney built American Apparel – the clothing line known for its racy ad campaigns and emphasis on American-made products – out of a tshirt business in his dorm room at Tufts University. He was an outspoken opponent of sweatshop labor and a prominent advocate for immigration reform.

He was also a weird guy.

“It’s important that every generation there’s going to be people that push boundaries, and those are my people,” Charney told Marketplace’s Kai Ryssdal in an interview earlier in 2014. Ryssdal asked Charney what his biggest weakness was, to which he replied: “my biggest weakness is me, lock me up already. It’s obvious! Put me in a cage, I’ll be fine. You know, I’m my own worst enemy. But what can you do, I was born strange.”

Charney has been the subject of numerous lawsuits alleging sexual harassment or mistreatment, including one alleged incident where he rubbed dirt in the face of a store manager. All of the suits, which Charney and American Apparel have previously said were frivolous attempts at extracting money, have been dismissed or settled.

The board, it would appear, got tired of either the negative attention, or Charney’s personal idiosyncrasies, or both. In any case, some event appears to have given them what they needed to make a move; the board cited an “ongoing investigation into alleged misconduct.”

For now, the company’s CFO John Luttrell is taking over as interim CEO.

But succession is often difficult for large companies.

“Think about what you learned in history or the Bible,” says Joseph Bower, Baker Foundation professor at Harvard Business School. “How often were successions smooth, as opposed to how often did sons kill fathers, fathers kill sons, wars happen.”

Plus, it’s not every CEO that is cooperative. “Succession is also about power, and you’re asking someone to give up power,” he says.

Whoever takes over American Apparel for the long haul will have a difficult challenge. The company posted a net loss of $106.3 million in 2013, a $ 5.5 million loss for the first quarter of 2014, and is selling $30.5 million in stock to pay its debts.

American Apparel also noted that the change in management may have triggered a default, a status it is negotiating with creditors. 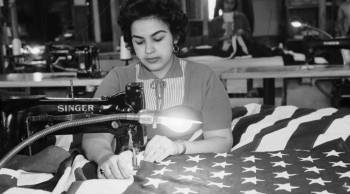