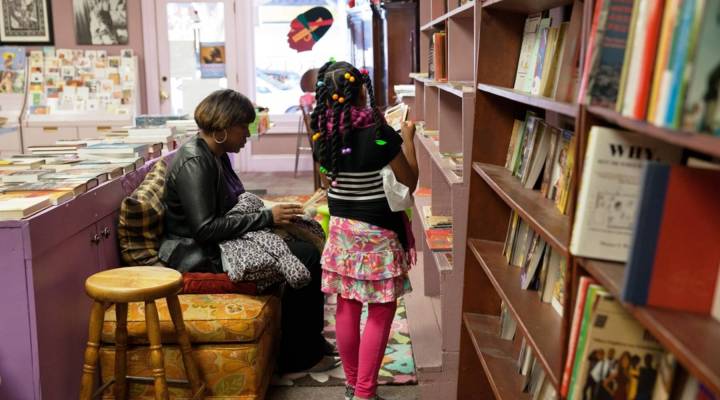 During World War II, the Navy hired thousands of workers for its San Francisco Bay Area shipyards. Many were black migrants from the South who settled in the city’s Fillmore District — a neighborhood left with vacancies because of the internment of Japanese-Americans.

A vibrant black community flourished, and music venues opened up on nearly every block, hosting jazz greats like Ella Fitzgerald, Charles Mingus, and Duke Ellington. The Fillmore District was nicknamed the Harlem of the West.

In those years, if you were a black visitor to San Francisco, you most likely made a pilgrimage to Marcus Books. In 1956, the NAACP convention came to town, and Reverend Amos Brown — then just 15-years-old — was a delegate from Mississippi traveling with his mentor, civil rights hero Medger Evers. It was the first time Brown met Dr. Martin Luther King Jr, and the first time he visited Marcus Books.

“It was an iconic institution of culture, information, sociopolitical empowerment,” Brown reminisced. “Many international scholars and thinkers and civil rights leaders appeared at Marcus bookstore.”

The store began as a publishing company, printing hard-to-find texts from black leaders like Marcus Garvey, whom the bookstore was named after.

San Francisco poet Devorah Major says her father first brought her to Marcus Books when she was two years old. Later, the store was crucial to her career as a writer.

“I did readings when my first novel went out at Barnes & Noble, and they didn’t care — I’d have five, or six, or ten people there,” she said. “I went to Marcus, and it was standing room only. It also is a measure of support, and those turn into sales.”

Marcus Books got into financial trouble last year, and the owners couldn’t afford to keep the store open. They tried a crowdfunding campaign to help raise money to buy back the property, and their supporters rallied on the steps of City Hall. But Reverend Amos Brown says the store’s problems started long before this. Business took a hit as San Francisco’s black residents moved out.

“We’ve lost over 50,000 since 1970, and that’s tragic,” Brown said recently when I talked to him in his office at San Francisco’s Third Baptist Church, where he arrived as pastor in 1976.  In the 1960s and ’70s, city redevelopment policies displaced thousands of African Americans, and segregation often made it difficult to find new housing.

Brown is now the president of the San Francisco chapter of the NAACP. The city, he says, is not as liberal and friendly towards African-Americans as its reputation might suggest.

“When it comes to employment, education, and housing opportunities, it’s not the ideal place to be in. If there is not a positive effort made to work with the African-American community to stop this hemorrhaging, I predict that in the next 5 to 10 years, there will not be 20,000 blacks left in this city.”

Black residents began leaving long before the current tech boom in the city, which has only made housing rentals even more difficult to secure. Mayor Ed Lee has committed to building 30,000 new affordable housing units in by 2020. Today, most of San Francisco’s black residents are low income renters.

Theodore Miller is director of San Francisco’s Out-Migration Initiative, the government’s latest attempt to retain black residents. One of Miller’s priorities is attracting young, college educated African-Americans to the city.

“We know the city of San Francisco is experiencing record growth across industries, and we need to make sure that African-Americans throughout the country think about San Francisco as a place to live and grow and raise their families,” he said.

But even if a new wave of black residents settles here, they’ll arrive in a city without many black-owned businesses. And Marcus Books in San Francisco won’t be one of them — it’s gone for good.

This story was produced by TurnstyleNews.com, a project of Youth Radio.