Potatoes fight to get on the WIC nutrition list

Potatoes fight to get on the WIC nutrition list

Funding for WIC, the food assistance program for low-income women, infants and children, is expected to be debated on the floor of the House this week, and the Senate soon after. One of the more surprising issues that will come up: potatoes.

WIC gives low-income mothers vouchers to buy certain foods—foods with nutrients they might not otherwise be getting enough of. A panel of scientists puts together the list, and it has evolved (once carrots were one of the only approved vegetables). A few years ago the list was overhauled to add all kinds of fresh fruits and veggies.

But one food item scientists left off the list: potatoes. This has recently become a concern for a bipartisan group of congress-folk.

“Never would I have guessed that the lowly potato would turn out to be such a contentious issue,” said Republican Senator Susan Collins at a Senate Agriculture Committee hearing recently. Collins is from Maine–home to a lot of potato growers.

Collins has been leading the fight to get fresh potatoes—just fresh ones—put on the WIC list. She passed around a chart showing the nutritional value of potatoes. A few of her colleagues made “hot potato” jokes.

But this is serious business for people like Mark Szymanski, with the National Potato Council.

“As the National Potato Council and the entire potato industry, we’re very concerned when the federal government is telling people they should avoid our vegetable,” Szymanski says.

But Marion Nestle, a professor of nutrition at New York University, says the government isn’t trying to ostracize potatoes. Nestle, who loves potatoes herself (“there’s nothing more delicious than a baked potato,” she told me), argues they shouldn’t be on the WIC-approved list because WIC participants are eating plenty of potatoes already—especially the kind that wind up as french fries and potato chips.

Eric Rimm, a professor of nutrition at Harvard who advises the USDA, says the point of WIC money is to encourage pregnant women and young kids to go beyond potato.

“Forty-five percent of vegetables consumed by women of child-bearing age are already potatoes, he argues, citing a 2013 study. “It’s not like we’re a potato-deficient society.” 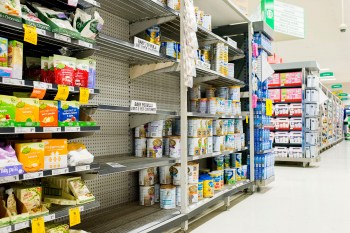