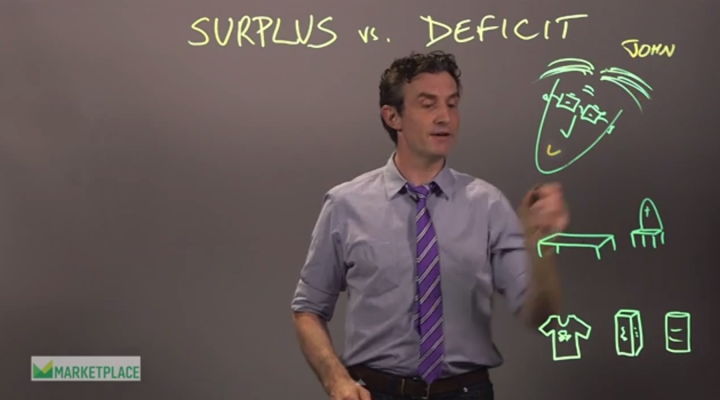 The difference between debt and deficit: An explainer

The difference between debt and deficit: An explainer

Paddy Hirsch at the Marketplace Whiteboard

A lot of people confuse the words debt and deficit. They’re not quite the same, although they are related.

It’s pretty simple, though. If you spend more money than you make, that’s a deficit. And if you run a deficit, you have a choice: you can either borrow money and go into debt, or you can go bust, or default.

Debt itself isn’t necessarily bad. Debt can help you grow – you may not be able to get an education without a student loan, for example. And just because you have some debt doesn’t necessarily mean you’re running a deficit. So long as you make enough money to pay the interest on the loan without going into more debt, you’re in good shape. You may even be running a surplus, which is when you make more money than you spend.

The one thing you don’t want to do, as a homeowner, is to use debt to run a deficit. In other words, you don’t want to get into a situation where you’re spending more money than you make, and you’re making up the difference by borrowing.

But that’s what a lot of Americans do. And they do it by using credit card debt. The Federal Reserve’s latest figures say American household debt is now $13 trillion, and the average U.S. household credit card debt stands at $15,191.

For a household, then, running a deficit is, generally, a bad idea, particularly if you’re using credit card debt to stay afloat.

But what about a country? The U.S. has a roughly $17 trillion debt load. And our government spends $306.4 billion more than it earns. And we make up for that $47.2 billion deficit by borrowing even more!

The fact is that when countries borrow to make up a deficit, they generally don’t have to resort to the most expensive debt out there. And in the case of the U.S. government, it’s the reverse: the U.S. is able to borrow at the cheapest rate anywhere.

But just because we can run a deficit cheaply doesn’t mean we should, does it?

That depends on your points of view. An economy like the U.S. is far more complicated than a household. It has many more variables, and is infinitely more complex. To ensure the economy didn’t run at a deficit, the country’s leaders would need a big insurance plan to deal with any variables that required more money than they expected.

That would mean having a large reserve, and running a big surplus. That, in turn, would mean keeping that money out of circulation, which would inevitably crimp growth – perhaps a smart plan for a household, but not a healthy strategy for an economy.