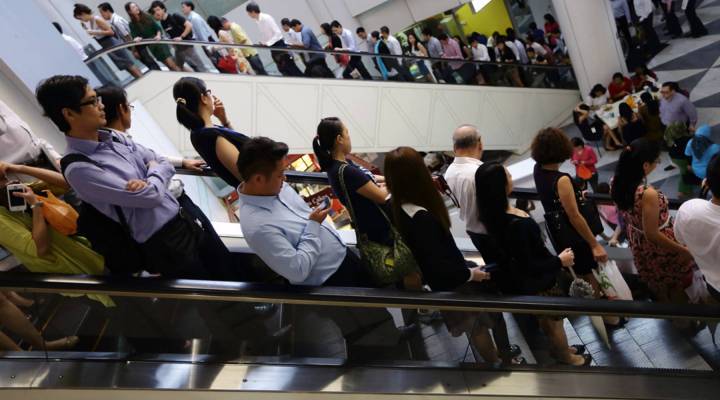 Singapore’s got some big retirement issues

Commuters commute at lunch hour at Raffles Place on February 14, 2013 in Singapore. The government white paper revealed Singapore's population may increase 30 percent to over 6.9 million by 2030, with nearly half the population expected to be foreign-born. Suhaimi Abdullah/Getty Images
Marketplace Whiteboard®

Singapore’s got some big retirement issues

Commuters commute at lunch hour at Raffles Place on February 14, 2013 in Singapore. The government white paper revealed Singapore's population may increase 30 percent to over 6.9 million by 2030, with nearly half the population expected to be foreign-born. Suhaimi Abdullah/Getty Images

Here in the U.S., it’s pretty standard to complain volubly and publicly about government programs, particularly those to do with retirement – Social Security, healthcare for the elderly and the poor and pension and retirement plans in general.

“Openly” being, of course, on the Web. On blogs and on social media, and particularly on Facebook (Singaporeans were big users of Facebook at a time when most Americans were still obsessed with MySpace). A debate that would ordinarily have been held in private, in coffee shops or around dinner tables, has been running for some time in the very public forum of social media.

Many Singaporeans are not happy about the way their retirement program, the Central Provident Fund (CPF), is being handled by the government, and, for once, they’re not being shy about expressing their feelings. Emotions are running so high that  a prominent blogger named Roy Ngerng recently made the claim that Singapore’s prime minister had “misappropriated” Singaporeans retirement money. The prime minister responded equally disproportionately, by slapping Ngerng with a lawsuit.

I’m not going to drive you insane with an explanation of how CPF works: it deals with social security, retirement planning and medical insurance all in one-go, so as you can imagine, it’s pretty complicated. You can read more here and here. Many observers point admiringly at the CPF, saying it’s an excellent example of effective central planning. But just like Social Security in the U.S. and equivalent programs in Europe and the rest of the world, CPF is coming under intense pressure.

The pressure comes in two parts. First, Singaporeans are living longer. Second, healthcare costs here are soaring. Any of that sound familiar? It’s a double-barreled shotgun that every developed nation is facing down right now.

Singapore’s response will sound equally familiar: The government, more accurately the ruling Peoples Action Party (which has won every election ever held here),  is demanding its citizens cough up more money. Its recent demand that some Singaporeans put a greater proportion of their salary into the CPF sounds to many like a tax hike. Which it effectively is.

The changes to CPF are not going down well. But it’s encouraging to see some Singaporeans standing up and demanding transparency from the government about the way CPF is run. It’s a pity, however, that the PAP is resorting to old-school methods to deal with the media storm. They’re missing an opportunity to show how mature Singapore is, how unafraid are its leaders of criticism, and how much more open they can be about the way government programs are handled.

Regardless, Singapore has a problem: it has become too successful, too quickly. When the country gained independence in 1963, its people expected to live until around 66 years of age, on average. Today they expect to live until they’re 82. That’s a sign of how quickly and efficiently the country has developed, but it has put its systems under enormous strain.

It almost makes America’s social security system look as though its in relatively good shape!

Paddy Hirsch filed this while on vacation in Southeast Asia.