The Seattle city council is expected to approve a proposal to raise the city’s minimum wage to $15 an hour. That would be the highest rate for any large U.S. city, and would tie for the highest in the nation.

Surprisingly, the hike in pay has some unusual backers: leaders in the business community.

“The business community and the Chamber did not come out of the box saying, ‘Hell no. Let’s defeat this,’” says Howard Wright, CEO of the Seattle Hospitality Group. He also represented employers as co-chair of the committee.

Wright and other business-types want to avoid what happened in the nearby town of Sea Tac. When Sea Tac raised its minimum wage to $15 an hour, businesses didn’t have enough time to prepare. In order to afford the new wage law, employers cut benefits and laid off workers.

In Seattle, companies would have more time to get ready — Small businesses would have up to seven years to implement the higher minimum wage.

Mayors in other cities like Chicago are also talking about adopting a higher minimum wage.

Brookings Institution senior fellow Alan Berube studies income inequality. According to Berube, “Seattle is out front of what is quickly becoming a national trend of big cities looking at local minimum wages as a way of addressing income inequality and keeping their cities affordable for low and moderate income citizens.” 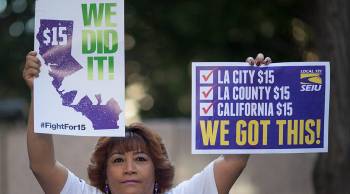 Tell us how the minimum wage affects you