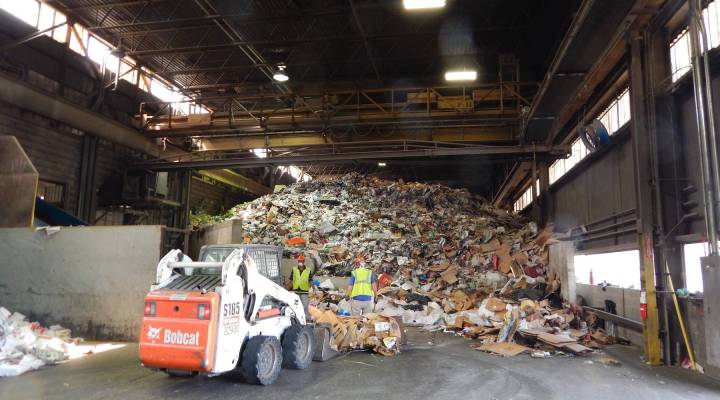 COPY
The Rumpke Recycling center in downtown Dayton, Ohio. Rumpke is currently upgrading its facilities for processing single-stream recycling in the area—but says it can't use most paper cups. Lewis Wallace

The Rumpke Recycling center in downtown Dayton, Ohio. Rumpke is currently upgrading its facilities for processing single-stream recycling in the area—but says it can't use most paper cups. Lewis Wallace
Listen Now

Fancy drinks—your lattes, mochas and the like—have been getting fancier cups lately. Double-walled paper, compostable, recycled… you name it. As a result, the paper cup industry is on the rise, and it’s edging out the old go-to in to-go cups, polystyrene, usually known as styrofoam.

At an International Paper factory in Kenton, Ohio, 16-ounce coffee cups fly through tubes along the ceiling and land in neat stacks. The paper giant plans to spend over $60 million to expand its plant floor in central Ohio and add 125 jobs by mid-2015.

“It’s very exciting, we’re in a growth business right now, there is increased demand for our products and there has been for a number of years running,” says Michael Lenihan, director of sales for food services at IP.

“Right now, it seems like the consumer is saying, ‘We want sustainably-sourced products that are made from renewable resources’,” Lenihan says.

The interest in renewable resources has been bad news for foam products: lately some big names like McDonald’s and Jamba Juice have tossed polystyrene cups and gone to paper, under pressure from environmental groups. In 2013, New York City banned polystyrene food packaging.

Meanwhile, demand for paper cup stock has risen to fill the gap. According to the American Forest and Paper Association, production for domestic use of cup stock rose 16 percent in the last five years. Containerboard production is also growing due to the increasing popularity of online shopping and the associated shipping. Good old-fashioned paper and newspaper have taken a hit, but International Paper is making up for it in other areas.

International Paper’s various products have a lot of green labels: The company works with the Sustainable Forestry Initiative to use certified sustainable forests for some products, and they produce compostable EcoTainer cups and 10 percent post-consumer recycled cups. All that could make you feel vaguely good about your double macchiato, to go.

But foam—the kind you’d probably know as styrofoam (which is actually a brand name trademarked to Dow, not a generic product name)—is also trying to get on that green wagon.

“Most of this is really a perception issue,” says Michael Westerfield, the head of recycling for Dart, a major foam cup producer. Polystyrene foam is known for being hard to dispose of. But Westerfield says foam is mostly air, so it actually takes less energy than paper to produce and ship. And it can be recycled in some places; Dart even runs a few recycling plants itself.

“There’s no doubt that foam has environmental attributes that are very favorable when compared to paper,” Westerfield argues. Dart recently acquired Solo, which makes paper, plastic and foam cups, and Westerfield says the company is working on recycling solutions in all areas.

How to sort through all this potential garbage? Product safety company UL is one of several companies that do independent sustainability analyses for companies, making its own business out of sorting through green claims.

“Some of these debates, like paper versus plastic or paper versus styrofoam always somewhat amuse me,” says Scot Case, director of markets development for UL Environment. He says foam has well-known issues, but paper has hidden costs—it does take a lot of water and energy to make paper. So when you look at the whole life cycle, says Case, the answer is: bring your own cup.

“A reusable mug, a reusable glass tends to trump either of those options,” Case says, even accounting for the water and energy used to manufacture and wash the reusable cup.

With both foam and paper, there’s also the matter of where all those billions of cups end up. Over at Rumpke Recycling in Dayton, marketing director David Schwendeman points at a giant pile of bottles, cans, paper—birds are picking through for food.

“We’re a middleman,” he says. “We don’t have a magical black box to take things and make ‘em into something.”

To recycle a product he needs to be able to sell it to someone, and a lot of paper cups are coated in plastic or contaminated with liquid residue. In most (but not all) U.S. Cities, they are no more recyclable than foam. In addition, compostable cups generally have to be composted in an industrial composting facility; unless you live in a city that does pick-up for a composting facility, your compostable cup is probably headed to a landfill, where it may never actually break down.

A promise by Starbucks to make all of its cups recyclable in Starbucks stores by 2015 has been delayed; Starbucks acknowledges on its website that it has “struggled to implement this single solution.”

So your coffee cup might seem greener than the next disposable thing, but here at Rumpke Recycling, it’s just clogging up the system.