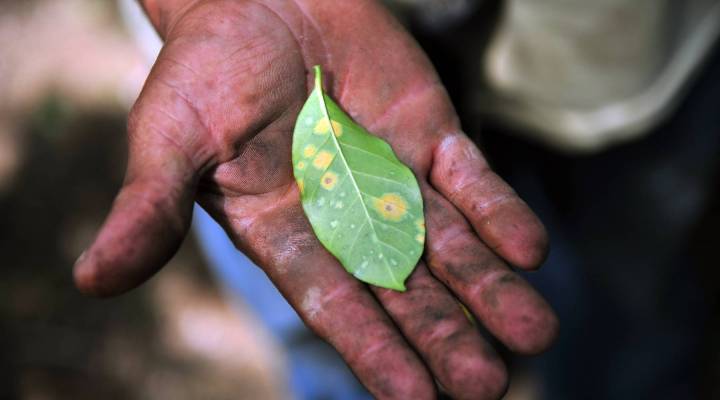 COPY
A worker shows a leaf of a coffee plant affceted by Roya, at a farm in San Ramon, a town on the outskirts of Diriamba. Hector Retamal/AFP/Getty Images

A worker shows a leaf of a coffee plant affceted by Roya, at a farm in San Ramon, a town on the outskirts of Diriamba. Hector Retamal/AFP/Getty Images
Listen Now

Farmers and harvesters in Central and South America have been hit hard by Roya, or “coffee rust,” a fast-spreading fungus that infects the leaves of coffee plants. Roya has caused an estimated $1 billion in damage, and threatened the livelihoods of more than half a million families from Mexico to Peru.

“Entire fields have just been devastated by the rust,” said Jonathan Rosenthal, executive director of Cooperative Coffees, who saw the impact of the rust in Honduras. “The trees have turned to skeletons. It’s like a ghost town.”

The U.S. is stepping up its efforts to help eradicate the disease, partnering with Texas A&M’s World Coffee Research Center. Coffee farming has lifted many families in Central and South America out of poverty. USAID Administrator Rajiv Shah says the organization’s Feed the Future program has connected thousands of coffee growers to companies including Starbucks and Peet’s. In some cases, Shah said, those farmers have seen their yearly incomes double or triple. He warns that as families fall into poverty, they become increasingly susceptible to the influence of drug traffickers and gangs.

“They prey upon communities that are poor, where lots of children are hungry, and they offer them an illicit income opportunity by producing drugs and selling drugs,” Shah said.

Fungicides are able to treat the blight, but many small farmers can’t afford them.

“The fungicide requires investment; the tools that are used to apply the fungicide require investment,” said Lindsey Bolger, vice president of coffee sourcing and excellence for Keurig Green Mountain. “In some cases, these farmers just don’t have the resources that they need.”