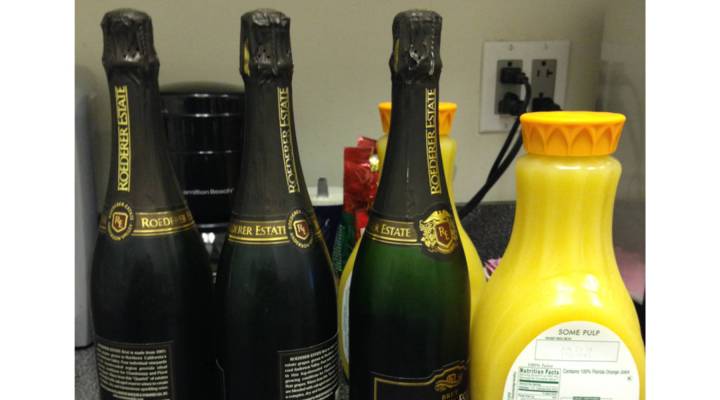 The best conversations happen over brunch

The best conversations happen over brunch

Here in the New York Bureau of Marketplace, we’re getting ready for brunch. We even have the fixings for mimosas.

But brunch, or really “Marketplace Brunch” is one of the segments we’re trying out for our new show, Marketplace Weekend. The idea is to take some of the really smart and creative people inside the Marketplace family, and have the kind of conversation you might have over a meal with your friends… but do it on the radio.

So I’ll be gathering in the studio with people like Stacey Vanek Smith, Sabri Ben-Achour and Mark Garrison, to talk about what they’re covering. And probably more importantly: what’s on their mind as they look ahead to the week that’s coming up.

All this is part of how you create a new show: You come up with ideas for segments, try them out, and see how they sound. Earlier, we tried a segment that took responses from Twitter and Facebook, and folded them into a personal finance conversation. I’ll let you into a secret: it sounded awful! Nobody (even my mother) wants to listen to me reading a bunch of tweets. So we reworked it, with a listener calling in to talk about her student loan debt. And that version was great!

We want to make sure that Marketplace Weekend is fun and dynamic, and that we never lose sight of where human experiences fit in economic stories.

A while back, we did a story on Marketplace Money that examined gentrification. It’s a model for where we want to go with the new show.

We introduced listeners to Britty Krone, a lifelong Harlem resident. She took me on a tour of her neighborhood and told about the changes that were happening, and what it felt like to live through them.

Gentrification is a huge story: it touches on policy, politics, housing prices, race, and the changing nature of our cities. But at its heart, it’s really a story about human beings. Brittny’s example was a good reminder of that.

As we create this new show, we want to keep doing stories like that: complex, multi-layered, and demanding a little extra thought and care.

We also want your input. So keep it coming! Tell us what you want in Marketplace Weekend. The kinds of stories and sounds that you want to listen to when you have your own… well… brunch.