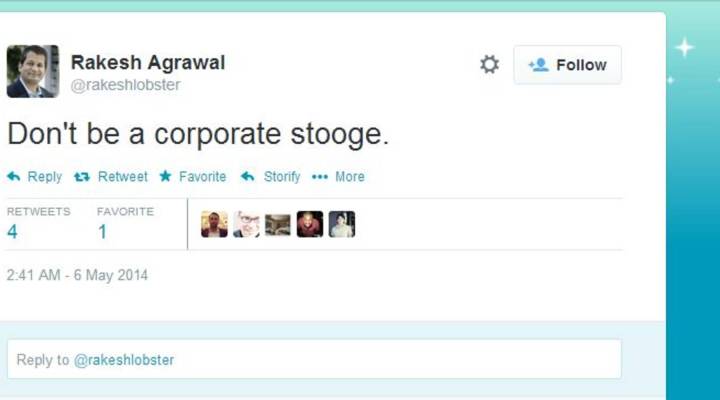 Rakesh Agrawal, a former PayPal executive who mistakenly tweeted offensive statements about his co-workers, later appeared to be doubling down on Twitter by threatening to make a former colleague’s text messages public.

“If you don’t stand up for me, I will start sharing your text messages to me,” Agrawal tweeted to a colleague he referred to as “Stan.” “Do the right thing. Your move, Stan.”

If you don’t stand up for me I will start sharing your text messages to me. Do the right thing.

“People who have a big need for power are going to be able to hold companies hostage,” Crowe said, adding that companies like PayPal can either ignore the tweets of an unhappy former employee like Agrawal, or fight back.

“You can make his reputation so bad in the tech world, that nobody will want to hire him, do business with him, do deals with him, and maybe not even email him,” Crowe said.

Of course, once an employee has been fired, or has resigned from a job, the former employer may hold little sway.

“The ability to extract any consequence is limited, because the individual no longer has the fear of losing their job,” said Stephanie Trudeau, a labor and employment attorney at the law firm of Ulmer and Berne.

Still, as much as this is an age of social media, it is also one of litigiousness. Trudeau says if Agrawal makes public messages that were sent to him privately, he could find himself facing an invasion of privacy lawsuit.