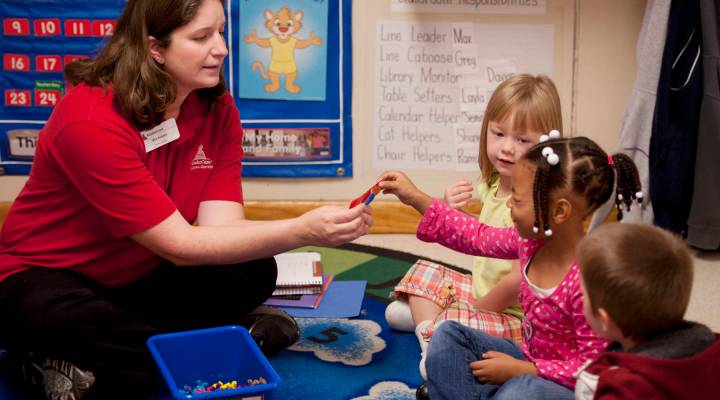 When 4 out of 5 teachers are white

When 4 out of 5 teachers are white

Close to 50 percent of U.S. public school students are young people of color, but 4 out of 5 teachers are white, according to new research from the Center for American Progress and the National Education Association. Education researchers say a lack of diversity among educators leaves children less prepared for the increasingly diverse workplaces they’ll be entering.

Researchers say there are several reasons for the dearth of diverse teachers, among them, a changing workplace landscape that is more inclusive of African-Americans, Hispanics and others.

LaRuth Gray, a scholar in residence at NYU’s Metropolitan Center for Research on Equity and the Transformation of Schools, says a few decades ago, teaching was one of a few professions by which African-Americans could gain entry into the middle class.

Gray said when she was growing up in Texarkana, TX, in the 1950s, “You either became a teacher (which was respected), a funeral parlor director, you worked as a railroad porter, (where you got good tips), or maybe you went to work for the post office. In terms of economics, that’s where you went in order to provide a step and a ladder up for your family.”

Gray, who speaks warmly of the supportive and nurturing environment provided by the African-American teachers of her youth, nonetheless, says that her horizons as a child might have been broadened had she been taught by staff of different backgrounds.

“It is important in a population of students for the 21st centrury and beyond, we’re moving toward a global world, that students see teachers of all backgrounds,” Gray said.

Ulrich Boser, a Senior Fellow at the Center for American Progress, who co-authored a new report on diversity among educators, says that in many schools today, the teaching workforce “look[s] like it meandered out of the 1950s.” Boser says diversity is important for two very crucial reasons.

“Research shows students of color do much better in terms of academic outcomes with teachers of color,” Boser said. “They see them as role models. Student achievement, graduation rates, test scores all go up.”

And for white students, having non-white teachers is a critical part of preparing for the increasingly diverse, “real” world.

“It’s important for white students to engage with Hispanic teachers, to engage with Black teachers,” Boser said, “because the world of work is a world in which we have to engage and cooperate and communicate with people who come from different backgrounds.”