Rick Warren, author of the best-seller “The Purpose-Driven Life,” is expanding his Saddleback Church from the Los Angeles suburbs to 12 global cities.  Last weekend, a campus in Los Angeles joined Buenos Aires, Hong Kong, Manila and Berlin. Moscow, Tokyo, and Accra are among those coming soon.

Scott Thumma, an expert on mega-churches from the Hartford Seminary, isn’t surprised:  He says the megachurch is a global phenomenon. Of the world’s top 20 megachurches, only one is in the U.S.

“If you just look at it in the United States, you see it as a suburban reality,” he says. “It’s kind of recreating a kind of small-town connectedness with people who have like values and interests,” he says. Around the world, he says, that’s “what we’re all  longing for, in the anonnymous urban setting.”

Seoul is the world leader in mega-churches. Its Yoido Full Gospel Church boasts almost a half-million churchgoers per week. And it’s not the only one.

Data from outside the U.S. adapted from Warren Bird’s list of the World’s Biggest Churches. Data on Lakewood Church from Thumma’s U.S. Megachurch Database.

A lot of mega-churches now have multiple locations.

“You get to a point where it becomes a franchise model,” says Thumma. “It’s easier and more cost-effective to plant several campuses around town.”

Like McDonald’s, the experience is the same wherever you go, including a variety of more-intimate worship settings in a single campus, with the pastor beaming in his sermon via closed-circuit.

Warren has an advantage for someone growing a church: worldwide fame. His book has been translated into 85 languages.

“That gives brand recognition to him and his church,” says Richard Flory, research director at the University of Southern California’s Center for Religion and Civic Culture.

Here’s a map of mega-churches in North America, based on a database Thumma has compiled. 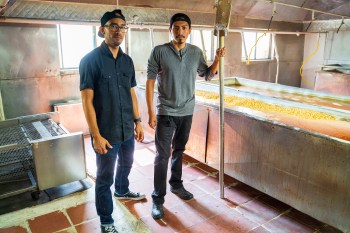