Military commissaries, grocery stores that sell name-brand products to military families basically at cost, are facing a billion-dollar budget cut over the next three years. And defense officials are considering a sea change for commissaries: allowing them to stock generic.

That’s something Patt Donaldson would like, and steering two kids and two loaded carts, he and his wife Jessica Donaldson wrap up a big shopping trip.

She’s in the Navy and they live near the Fort Belvoir Commissary in Virginia. But they do these big runs off base – at ALDI, Costco, and Wegmans. They like the produce better, and all the store brands. Generic yogurt, canned fruit and pasta run down the belt to checkout.

This is something military spouses often debate – where to get the best deals. Commissaries offer 30 percent savings on a typical basket of brand name goods, though some products see steeper discounts than others.

Currently, commissaries can’t sell generics. But now that the Pentagon has proposed a billion dollar commissary cut over three years, commissary prices are expected to rise. That has some officials wondering if stocking generics is a solution.

“If I’m a young soldier and I choose to go to the commissary… the only thing I can buy is Green Giant or Hunt’s brands,” he said. “But I can go to Walmart and get great value and that’s 30 cents less for a can of corn than it is in the commissary.”

So stock generics and everyone saves, right? Upsetting the commissary ecology has risks, says Tom Gordy, President of the Armed Forces Marketing Council, which represents military brokers who work with the name brands.

Say for example the Defense Commissary Agency went out and contracted for a store brand. Let’s call it Five Star Food. “That means the name brand products that are on the shelves will lose their shelf space, and they will also lose volume of sales,” he says.

Five Star Food would have costs, of course. To make it look as cheap as a generics in civilian groceries, Gordy says commissaries might have to mark up their remaining name brands even more.

“The manufacturers right now, most of them give best pricing to the Defense Commissary Agency,” he says.

They also provide marketing dollars. They even stock shelves. All, Gordy says, to support a military benefit. They might be less inclined to subsidize a military business. 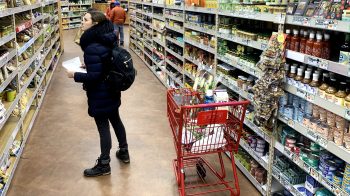 Military Money
Tags in this Story
Share this Story