Doctors and developers are building apps to keep you sober

Doctors and developers are building apps to keep you sober

Among the endless list of health-related apps for the mobile world, there are a growing number of efforts to use your smartphone to deal with serious addiction, such as alcoholism.

But the reviews of these apps’ effectiveness have been mixed. There’s a new program at the University of Wisconsin that aims to support addicts after they leave a residential program.

“Some of things that are done with the app are behind the scenes,” says David Gustafson, director of the Center for Health Enhancement Systems Studies, worked on the application project. “For instance, the GPS system monitors the movement of the person and if they come close, for instance, to a bar they’ve identified as being a place where they used to drink a lot, the system can begin an accelerated form of rescue.”

He says the app can start off with a beep or play a message of the user talking about why it’s so important for them to stay sober. Other things the app can do is connect the user to a doctor or caregiver or find a nearby supporter or friend.

Gustafson says he believes this app has proven to be more effective because it has better theory behind its development. He also says the developers have thought about the privacy concerns such an app creates.

“There is a lot of information that is stored. We can track every keystroke that a person makes on a phone,” Gustafson says. “So it’s also really important to be really forthright with the person, giving them options about what they want to do, for instance, if they want to turn off the GPS system, they can do that.”

“We only use it for research, we don’t sell the information or share it in any other way.” 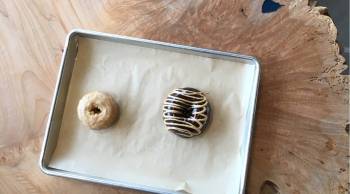