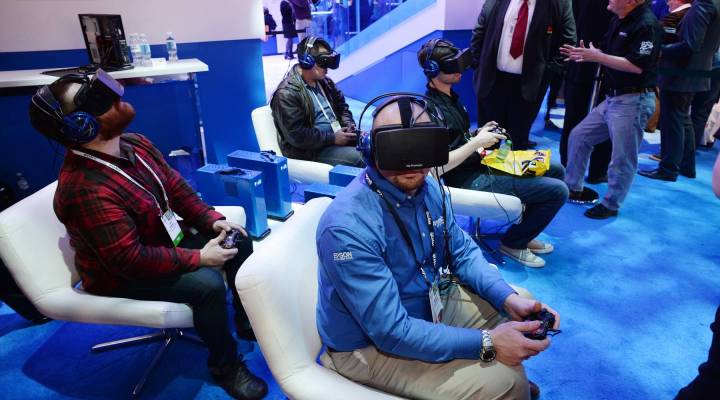 Facebook shelled out $2 billion in cash and stock for a company that makes a headset that lets users look around digital environments. The 20-month-old company, Oculus, is viewed as a potential leader in the virtual reality gaming industry. Some users though, report an issue with Rift that could impact its growth: motion sickness.

People using virtual reality technology have, for years, been dogged by the very same condition that afflicts real-life sea voyagers, car passengers, and those who have braved a particularly terrifying roller coaster.

Shun-nan Yang, Director of Research at the Vision Performance Institute at Pacific University’s College of Optometry explains why virtual reality technology can cause dizziness and nausea:

Head-mounted displays are likely to cause motion sickness symptoms (including disorientation, nausea, dizziness, and vertigo) because the simulated visual world often does not match the other physiological signals generated by the body (vestibular [head rotation] or proprioceptive [body motion] sensation).  For instance, the VR might simulate a pilot flying an airplane, but the actual non-visual signal suggests little motion, compared to what is expected for such episode/experience.  The brain (mid-brain more specifically) detects such mismatch and generate undesirable sensations in an attempt to dissuade such circumstances/activities.  Viewing 3D movies would cause the same symptoms because of the mismatch perceived by the viewers.  The same “warning” signal (e.g., nausea) is deployed to warn the body of undesirable smell or toxic foods.

Oculus is aware of the problem, and is working to improve it before Rift hits the shelves some time in the future. Real-world sufferers will, for now, have to keep relying on diphenhydramine.

*CORRECTION: An earlier version of this story misspelled the name of the company Oculus. The text has been corrected.