What’s the deal with presidents and comedy shows?

What’s the deal with presidents and comedy shows?

President Barack Obama appeared on yet another television show on Thursday, this time talking all things healthcare on the Ellen DeGeneres Show. Some (including media pundit Bill O’Reilly) may have been confused when they saw the President of the United States appear on the internet show Between Two Ferns with Zack Galifianakis only days prior, but it’s not as if presidents haven’t appeared in strange places before (anything to get a message to the people).

Richard Nixon was on Laugh In…

… and George W. Bush guest-starred on Deal or No Deal:

But Obama has truly gone out of his way to poke fun at himself, appearing on more late-night talk shows than any other modern Commander-In-Chief, which, according to some calulations, makes him more likable to the public. A short list of President Obama appearances on comedy-related television shows:

– Wore a Barack Obama mask on SNL during the 2008 campaign

– Slow-jammed the news with Jimmy Fallon

– Counted down a Top Ten list for David Letterman

To be fair, every politician tries to encourage media coverage of themselves and Obama is no exception… though he might be the first to get Five Guys with Brian Williams. But as omnipresent as Barack Obama has been on late night, First Lady Michelle Obama has him beat for off-the-beaten-path TV appearances. She’s been on iCarly, Sesame Street, and Iron Chef. 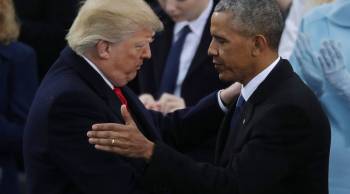