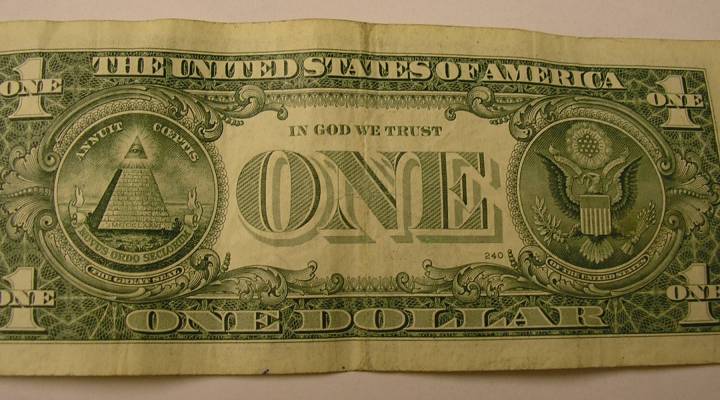 COPY
Why does the U.S. dollar bill have a pyramid with an eye on top? Nancy Marshall-Genzer
Live on Stage

Why does the U.S. dollar bill have a pyramid with an eye on top? Nancy Marshall-Genzer
Listen Now

First thing to remember:  There are lots of conspiracy theories about the dollar bill’s eye and pyramid. I wanted to see which ones were most popular. So I headed to the Bureau of Engraving and Printing in downtown Washington, to do my own, informal street survey.

First up, Ginny Cochran — who actually works at the Mint.  Her theory: “Something to do with the Masons, and I know it goes farther back than that.”

Well – it does go way back, to the founding of our country. Some of the founding fathers were Masons, and the eye has become a Masonic symbol. But it was actually added by an engraver who wasn’t a Mason.

“The official term is that’s the eye of providence. The eye of God, in some general way,” says Steven Bullock, a history professor at the Worcester Polytechnic Institute.

So, OK,  but where did the pyramid come from? The next theory from my impromptu survey comes from 9 year-old Brian Bush.

“Maybe King Tut?  That might be his pyramid?” he asks.

Brian had just finished touring the Bureau of Engraving and Printing. He says they didn’t mention the dollar bill’s pyramid on the tour. The conspiracy theorists would say, they don’t want us to know. But actually, Brian’s onto something.

“The pyramid was seen as the kind of human structure that lasted out the ages,” says Bill Ellis, a professor emeritus of American Studies at Penn State.

He says the founding fathers wanted the country to last as long as the pyramids.

But the pyramid and eye didn’t show up on the dollar bill until 1935. They started out as part of our Great Seal. FDR added them to the dollar.

That brings us to our next conspiracy theory, courtesy of Andrew Epting, who was waiting for a bus near the Mint.

“New world order.  It’s very folklorish,” he says about the back of the dollar.

“New order.” It does say that, in Latin, under the pyramid. Historians say that refers to the birth of a new country. And FDR liked the way it jived with his New Deal. But, for conspiracy theorists, the words “new order” on the dollar bill were a signal that the U.S. government had been taken over by evil forces.

“I’m glad we have video games [and] TV to take people’s minds off some of this stuff nowadays,” he says, laughing.

Of course, some video games actually revolve around conspiracy theories. So, is it any wonder that there’s so much conjecture about such a strange symbol?

Especially since we carry it around in our pockets.