According to documents leaked by Edward Snowden to the British newspaper the Guardian, millions of Yahoo webcam chats have been intercepted by British security agency GCHQ (Government Communications Headquarters) using systems developed by the NSA. The documents reveal British intelligence used a software program called Optic Nerve to intercept, at random, at least 1.8 million Yahoo video chats across the globe. The program was used to essentially run a giant experiment: still images were taken from the chats, stored, and run through facial recognition software that would try to find matches with targets. The revelations raise questions about other web chat services, says Chris Green, an analyst with Davies Murphy Group. “If they’ve been doing this with Yahoo it puts into focus all the other services that make use of webcam anything from skype to FaceTime.”

How do you create the next Silicon Valley? Don’t focus on finding the venture capitalists on Sand Hill Road — instead, look to build college campuses like Stanford University or the University of California, Berkeley. So says a new study from the Kaufman Foundation which looked at new businesses in 356 metro areas. “Their results — the fact that you have lots of educated people in the places where there are a lot of start ups — is absolutely right,” says Steve Kaplan, a professor of entrepreneurship and finance at the University of Chicago’s Booth School of Business. Kaplan notes the research doesn’t prove graduates will fuel more start-ups, only that the two tend to show up in the same cities. 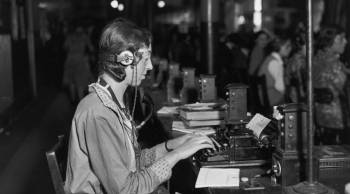 How communications tools change the workplace