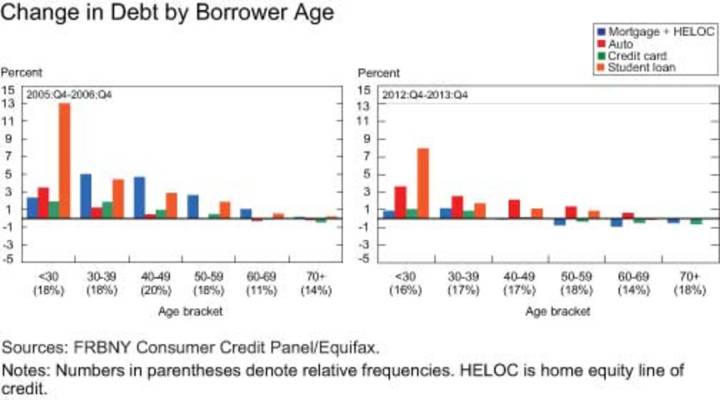 Numbers out today from the New York Fed show that we’re once again veering into dangerous territory when it comes to borrowing.

It’s not so much that we’re borrowing more – although the numbers are a bit staggering – it’s that the people that are borrowing, are much more likely to fail to make their interest payments or pay the money back.

Here’s the data: The New York Fed’s fourth-quarter Household Debt and Credit Report says aggregate consumer debt increased by $241 billion in the quarter, the largest quarter-to-quarter increase since 2007. More importantly, between the fourth quarter of 2012 and the same period a year later, total household debt rose $180 billion, marking the first four-quarter increase in outstanding debt since 2008. And we all remember what happened that year.

Up until recently, overall debt has been falling. But it has turned around this quarter because young people and people with poor credit are borrowing more, by taking out mortgages and ramping up their credit card use. That’s the first problem. The second problem is that those same kinds of borrowers are continuing a long-term trend of getting loans to buy cars and go to college.  As the New York Fed puts it:

“There’s been a tremendous amount of attention to the growth of student loans in recent years, and these charts [above] indicate some of the reason why. First, student loans grew the most of any debt product in both periods (in percentage terms). Second, the growth in educational debt, like that of auto loans, is concentrated among the lower and middle credit score groups.”

In other words, we’re borrowing more, which is juicing the economy. But the loans are risky, which means we may be storing up troubles for the future.