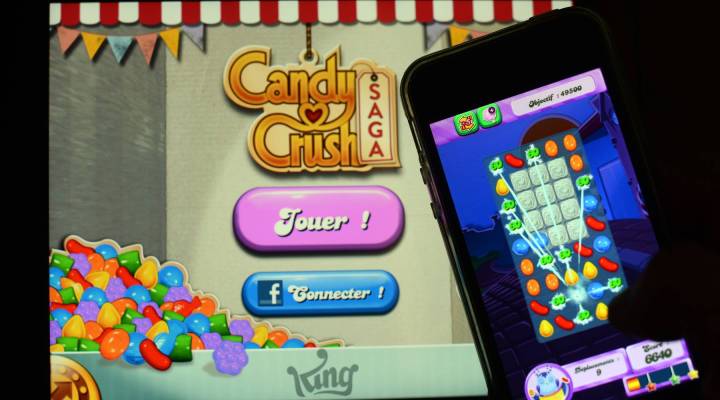 The game is free to download and to play, but it turns out, Candy Crush is a pretty sweet product. King Digital brought in more than half a billion dollars last year, $0.99 at a time.

I started playing Candy Crush last summer. For a couple months, I advanced from one level to the next… until I conquered level 35. Then, Candy Crush said I had to pay to get to level 36. I held out for six weeks, playing level 35 over and over again until I cracked.

“Everybody pays a dollar. I think that’s the point,” says Brian Blau, an analyst with Forrester Research. “There’s lots of different types of game mechanics that cause different pain points.”

Pain points are things like not being able to get to level 36, or having to wait.

You can play Candy Crush five times and then you have to wait half an hour to play again… unless you pay $0.99. Which I never did.

Except for a few times.

“Impatience is one of the game mechanics that the game developers will jump on,” says Blau.

Using our impatience or addiction to squeeze money out of us is nothing new.

“They employ psychologists the way casinos do,” says Rene Ritchie, editor in chief of iMore. “They do a lot of testing to see when users stop playing so they can optimize the game to make it a little easier to keep them on the game longer. It’s a huge, casino style business for them.”

And just like casinos, the so-called “free-mium model” is built around whales: People who shell out hundreds of dollars in a weekend on their ‘free’ game of choice.

“I knew a person who went out and bought a new iPad and then spent $100 dollars the first day on Candy Crush,” says Ritchie, “because if he couldn’t get past the level after 2 or 3 tries, he would just pay to get past it.”

Still, Ritchie says relying on free-mium is tricky, because addictive hits like Candy Crush are rare, and people get tired of them. Ritchie says game-makers need to mix free-mium with other models to avoid getting… crushed.

How to game the Candy Crush system:

They profit off your impatience. Defy their assessment of human nature. Hang in there!

Don’t waste special treats on levels that are easy to pass. You’ll need them on harder levels. Save lives.

Out of lives? You can ask your Facebook friends to donate more — though you’ll probably lose some in the process (friends, that is).

Move up the time on your phone to later in the day, month, or year, and watch your new lives trickle in. Careful, however: There have been reports of iPhones getting confused (think: a Y2K-style spin-out). You’ll know Candy Crush has ruined your life when you’re wishing your mother a happy Mother’s Day in August.

Reddit’s working on it. This link is not an endorsement.