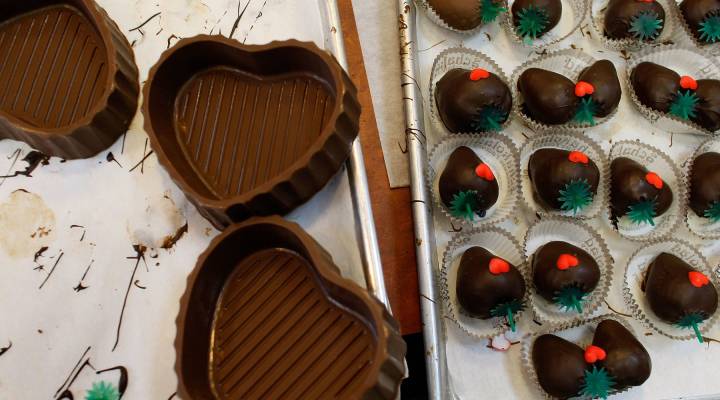 The real cost of Valentine’s Day

The real cost of Valentine’s Day

It’s Valentine’s Day. For a lot of people, that means a day of big spending (and total paranoia).

But is your Valentine’s Day dollar going to stretch as far this year as it did last year? Turns out, it depends.

Take roses. They’ve actually gotten less expensive. Jan Ooms has owned Roses and Blooms in Midtown Manhattan for more than 20 years. He shows off stacks of boxes that contain roses that have just been flown in from Ecuador.

Ooms says there is a Valentine’s mark-up. That’s because, to get all those flowers, shops like his have to contract out entire farms in Central and South America. Growers charge a premium for the risk of dedicating entire fields to roses that must be ready exactly on time for the critical week. In the end, a dozen roses at Roses and Blooms will set you back between $28 and $70 this Valentine’s Day (vase not included) and that’s not bad compared to five years ago.

“Overall, during the year, the price has been going down a little bit,” says Ooms. “The bad economy has been hitting the flower business pretty hard.”

“Flower prices overall have been declining over the past decade and that’s really with the emergence of online retailers,” explains Hester Jeon, research analyst with IBISworld. “Price-based competition is more severe because consumers can compare prices.”

“Champagne sales globally have been in decline since 2007,” says Ross Colbert, global beverage strategist with Rabobank. Colbert says demand for champagne has suffered as cheaper bubbly wines like prosecco and spumante have gained popularity. “Pricing today on champagne is probably as low as it’s going to go. There’s a lot of good value out there.”

You’ll need those champagne savings to help pay for chocolates this year. Chocolate prices have plumped up a lot lately and that’s mostly because of a price hike for chocolate’s main raw material.

“The price of cocoa has risen significantly,” says Jacques Torres,  New York-based chocolatier. He says cocoa prices are up more than 25 percent from last year. That’s partly because of skyrocketing demand from new markets like India and China, and partly because of fancier tastes here at home.

“Dark chocolate sells more and more and a higher percentage of dark,” says Torres. “We used to see a lot more milk and we’ve switched. Now we sell over 60 percent dark chocolates.”

Now, if only diamonds will do for your Valentine, be prepared to pay, says IBISWorld’s Jeon.

“10 percent of proposals take place on Valentine’s Day, which is interesting,” Jeon says.

Yes. Interesting. Jeon says more people are getting married this year, thanks to an increase in gay marriage and the improving economy.

“So we’re going to see a growth in demand for jewelry this year and also higher prices.”

All told, The National Retail Federation expects the average person will spend $133 this Valentine’s day, up from $130 last year.

“Woman are usually organized,” says Torres. “They will go on the website, look at the flavors and come a couple days before and shop. Men come the last 2 hours of the day. They rush, because they double park and they have a price in mind, but they don’t know what they buy… They come in saying, ‘I want $20, $50 worth of chocolate.’ When they pass $100, I know they are in trouble.”

That’s the thing… You could opt not to spend any money at all on Valentine’s Day, but that could end up costing a lot more.