Why a health insurance company entered the housing market

Why a health insurance company entered the housing market

A growing body of research says your health has a lot to do with where you live. If you’re poor and struggle to keep a roof over your head, you’re going to get sick more often.

UnitedHealth Group, the nation’s largest medical insurer, wants to help remedy the problem. The firm is taking an unusual step for an insurance company –investing $150 million to build low-income housing in a dozen states.

One of the states in Minnesota, where UnitedHealth Group is based. Vanessa Smith is benefitting. Smith just moved into a townhouse that was financed with help from UnitedHealth. The two-bedroom townhouse is in Ramsey, Minn., a Minneapolis suburb.

Smith has bipolar disorder and nerve pain. Because of her conditions, she lives on disability and a little money from child support. She has to move every few years to chase low rent.

“I get extremely stressed. And I do get upset,” she says.

Smith’s daughter Heather, who’s 16, has an awful time of it, too.

“Having to up and move and leave all the time… [with] friends and stuff, it gets annoying, and you just want to give up on life. Like not even caring if you have friends or anything,” she says.

UnitedHealth’s big push into housing isn’t charity. The company derives benefits from it, too, including tax credits.

That’s expensive for insurance companies, for patients and for the rest of us, who pay the price in higher premiums and taxes.

Other health care providers are also keyed into the idea that housing matters.

“Many of the kids we see are basically failing to thrive. They’re not able to grow their brains and bodies because they’re homeless and they’re not able to feed themselves on a regular basis, or they’re moving frequently,” says Meg Sandel, a pediatrician in Boston.

Sandel is professor of pediatrics and public health at Boston University, and a principal investigator at Children’s Health Watch, a research policy center.

She says her epiphany about housing came years ago when treating a child with asthma. The girl’s illness was tied to a mouse infestation at home.

“No amount of medicine I was going to give that child was going to make her safe to send back to that house,” Sandel says. “So it just drove home to me that the best prescription I could write was a healthy home.”

Sandel says one way to deal with this kind of problem is to pair doctors with lawyers who can go after slum landlords.

But overall, she says, the bigger issue is that rents are rising in many cities. And cheap housing is hard to come by, even the crummiest kind. Sandel says any contributions to the supply of housing, like what UnitedHealth is doing, can help.

A housing voucher lets Vanessa Smith pay just $350 a month in rent at the UnitedHealth-financed townhome in Ramsey, Minn.  At that price, she says there’s a good chance they will stay put.

That would make her daughter, Heather, very happy.

“If I could just stay in one spot and only one spot for the rest of my life,” Heather says, “it would be perfect.” 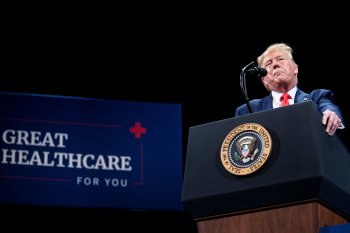