If you want to get your hands on Marc Jacobs’ Daisy perfume, the Daisy Marc Jacobs Tweet Shop is the place to be at New York’s Fashion Week. Customers line up out the door. But they they’re not paying with cash or card. They’re posting a Twitter hashtag to earn the product.

But Singer doesn’t feel like her store is just giving stuff away.

“How it works,” she says, “is that consumers are purchasing various products with social media.”

Singer shows me a photo backdrop in the corner. Customers can take pictures, and share them using the Daisy hashtag. They show a salesperson their posts, and they get a pocket-sized perfume bottle in return.

Chaya Markovits and Chaya Bluming just finished at the photo booth. They take their Instagram pictures to show the saleswoman.

“It’s a few pictures of me going crazy,” says Bluming.

“Ohhh,” says the saleswoman, “that’s really cool.” She shows them the various perfume products they can chose to take home.

Dane Atkinson has crunched those numbers. He’s CEO of SumAll, a New York startup that does marketing analytics. They looked at data from about 30,000 companies. SumAll connected tweets to web traffic and sales. They found that each time a customer tweets, it brings a company a pretty significant sales boost.

“From our math,” Atkinson says, “it was about twenty bucks.”

“A customer that’s tweeting on your behalf,” Atkinson explains, “creates more capital value for you, for sure. So you always want to find ways to get your communities to promote your product.”

The trick is to get as many social media users as possible to mention your company. Users like Diana Adams, a self-confessed “Twitter addict.”

Adams is a tech entrepreneur in Atlanta, and she’s pretty much the dream customer Tweeter. She’s got over 112,000 Twitter followers. That’s a lot of eyeballs taking notice when she promotes a company.

She says there are two ways companies try to get her to mention them. They can offer products — what you’ll find at the Daisy Marc Jacobs shop — or companies can straight up pay Adams for her tweets.

“I have done that,” Adams says. “I don’t think those are as effective, and the reason why is because on Twitter, the most effective tweets are the ones that are genuine. And so when you send out something that everybodyknows is an ad, people don’t want to click on that link, they’re just like, ‘Ugh, that’s an ad.'”

“That’s why she prefers companies that offer products in exchange for Tweets. She says this kind of exchange feels more authentic to Twitter users – they’re genuinely excited about getting the companies’ stuff. Past customer tweets have earned food from Burger King and Kellogg’s, and gift cards from American Express.

But remember, each of those customer tweets equates to about $20 in extra sales. So it’s the company that’s getting the good deal. 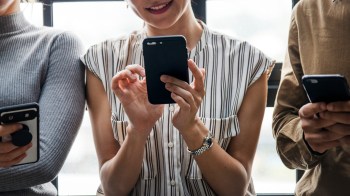 A company that encourages bartering finds it needs … currency