Designing battlefield technology to save lives

Designing battlefield technology to save lives

John Steinbaugh is a former special forces medic for the U.S. army. Now he works at a startup in Oregon called RevMedx . It’s made up of scientists and veterans trying to solve an evolving set of problems on the battlefield.

“The battlefield is fluid,” Steinbaugh says, “Every rotation you go there it’s like a new war. So medics are constantly coming back, updating other medics on what has changed on the battlefield, and one of the standard compaints was wound packing.”

Specifically, wound packing to try and stop bleeding after someone has been hit with a bullet. Or shrapnel. These kinds of wounds are deep and narrow. So Steinbaugh and others designed a new piece of tech to help. The XSTAT looks kind of like a syringe filled with little Sweet Tart candies. But they’re not candies.

“Picture a sponge that you would buy at the store that, when you run it under water, it grows about 15 times its size,” says Steinbaugh, “This idea came from taking the same compressed sponge technology and punching them into a bunch of pellets. Throw them all into one syringe, and when they make contact with fluid or blood, they all expand at the same time, creating a tremendous amount of pressure.”

That pressure seals wounds in 15 seconds. And the inventors say it’s enough to keep someone alive until they reach a hospital. The XSTAT is also designed to be light and be attached easily to body armor. RevMedx has recieved a $5 million grant from the U.S. Army to develop a finished prototype, and they won a grant from the Bill and Melinda Gates Foundation to develop a version to be used to stop postpartum bleeding. 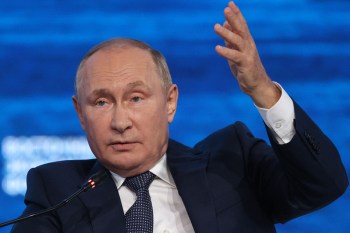