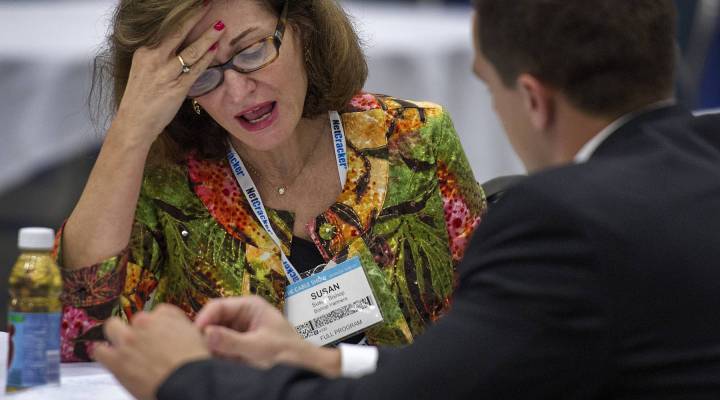 Why would you hire the long-term unemployed? Why not?

Why would you hire the long-term unemployed? Why not?

After losing her job in July 2012, Robyn Swirling didn’t hesitate.

“I started looking and working my connections the day I got laid off,” Swirling said.

Still, she had no luck for a year. Sometimes, she could feel a creeping sense of doubt from potential employers.

“When you’ve been looking for awhile and interviewing places, and you’ve gotten several interviews, it certainly starts to make people wonder why you haven’t gotten picked up by somebody,” said Swirling.

“It’s hard to look inside the mind of an employer, but I think most employers take the fact that someone has been out of work as a signal that they’re a lower-quality employee,” said Austin Nichols, a Senior Research Associate at the Urban Institute. “What research shows is that employers do discriminate against employees who are otherwise identical, but who have been out of work longer.”

David DiSalvo, who writes about science and technology for Forbes, says when a hiring manager is conducting an interview, he or she is also acting as a risk assessor. Applicants who have been out of work for a long time set off alarm bells. They might need training to update their skills.

“When this person comes on board, we’re going to have to invest X amount of money, time, [and] resources to ramp them up for the job,” DiSalvo said, citing a familiar employer worry. Similarly, he said, some hiring managers worry that applicants who have been out of work for a long time have fallen into “Patterns of behavior that are not conducive to a hard working style,” like rising early for work.

DiSalvo thinks that for President Obama’s initiative to work, hiring managers will have to let go of those biases. Robyn Swirling has some advice of her own for hiring managers.

“People who are going to want to get back into a job are going to work really, really hard to keep that job and do well at it,” Swirling said.