Vice President Biden got on the phone today with Ukrainian president Viktor Yanukovich.

The vice president said there would be “consequences” for the U.S.-Ukraine relationship if the violence and protests in Kiev continued. Demonstrations have been going on for months now.

David Stern is the BBC correspondent in Ukraine.

He says no matter what shakes out politically in Kiev, the economic damage has been done:

“It’s difficult to see how they can extract themselves out of this situation. What Mr. Yanukovich seems to have done with his deal with Russia where he got $15 billion in prospective loans and also cheaper gas is to have fended off an economic disaster. And I’ve been told it was possibly just weeks away. Now he’s managed to buy himself a little bit of breathing room. But he’s definitely not bought himself a successful economy. Ukraine is in recession right now. It doesn’t look like it’s going to get out. And the turbulence doesn’t make it look like a very (economically) attractive place. But let’s be honest, if the turbulance wasn’t there it wouldn’t be that attractive of a place.” 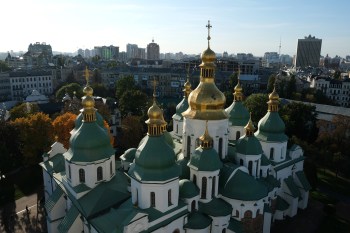