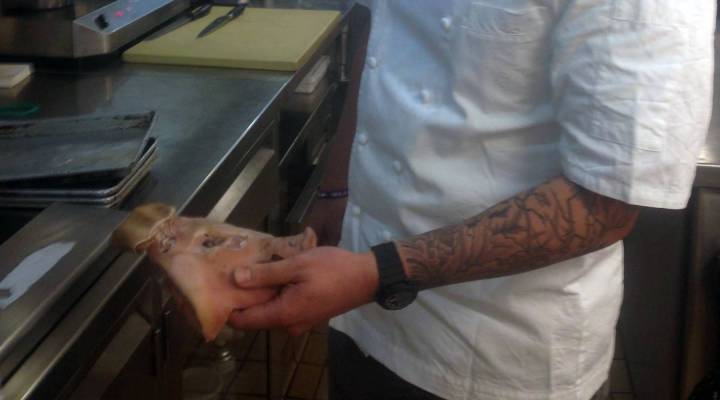 I’m in a high-brow part of New York at a high brow restaurant and I’m about to eat… a brow. “This is pig’s head. Enjoy,” laughs Nick Anderer, executive chef at Maialino restaurant in New York’s Grammercy Park neighborhood. Actually, it’s half a pig’s head, brined, deep fried and served on a salad. Teeth and all.

Crispy Suckling Pig Face has become one of most popular dishes at Maialino (‘suckling pig’ in Italian). Pig face’s popularity surprised Anderer. “I was completely surprised,” says Anderer. “I never thought that a dish of a pig’s face on a plate would sell as much as this one does.”

Part of the push to use more pig parts has to do with pork prices, which hit a 30 year high last year.

“When corn goes up, everything goes with it,” explains Steve Meyer, president of Paragon Economics, an agriculture market consulting firm. Meyer says pigs eat a lot of corn and corn prices have been at record highs. They’ve dropped a lot recently, so pork prices were poised to plunge, but now a deadly illness from China is hitting pig populations in the US. “Now we’re facing some supply challenges caused by a viral disease in baby pigs that might keep them high as we go through this next year as well,” says Meyer.

While the supply of pigs might be shrinking, demand for pork has been flying high. “Bacon has been a very big food trend,” says brand consultant Debra Kaye, author of Red Thread Thinking. Kaye says our cultural tastes have evolved and we are embracing bacon like never before. “We started to see that sweet, smoky, salty could go together… and what is better salty and smoky than bacon? And that’s where it really started to take off.”

Maialino chef, Nick Anderer says it’s not quite that simple. “Yes, pork prices spiked,” says Anderer. “But we made no price hikes in our dishes because we just didn’t feel like the perceived value would be there. Ultimately, pork is a comfort food for me and once you start charging luxury prices for it, it starts taking it into a realm that I don’t feel comfortable with.”

Faced with this pork pricing puzzle, Anderer’s done two things. The first is stretching the pork: “It’s such a great seasoning agent that it doesn’t need to be the main focus of a dish,” says Anderer. “It can just be a few ounces of torn meat with the malfatti pasta and arugula and you’ve got yourself a great dish.”

The other solution is to use more parts of the pig. “We sell a lot more weird pork dishes now than we did before,” says Anderer, including charred pig hearts, pig liver crostini, crispy pork skin served with vinegar and, of course, pig face.

Brand consultant Debra Kaye says our deep love of bacon is pushing us to boldly brave new frontiers of pork eating. She agreed to try Anderer’s famous pig’s face. He offered her the ear, which he says he usually eats first.

“That is so good, oh my god,” says Kaye. “The thing I give Figaro, my dog, for dessert every night is a pig’s ear. I don’t think I want to give it to him anymore they’re so good.”