Why a declining jobless rate may be worse than you think

Why a declining jobless rate may be worse than you think

The U.S. economy added 74,000 jobs in December, and the unemployment rate fell 0.3 percent to 6.7 percent, according to the Bureau of Labor Statistics.

The job increase was well below economists’ expectations. The unemployment rate, meanwhile, was not expected to fall at all.

The drop in unemployment was largely due to 347,000 people leaving the workforce, according to the household survey. That led to a 0.2 percent decline in the labor force participation rate (LFPR) to 62.8 percent, the lowest level since the late 1970s. At that time, LFPR was rising steadily, as many women entered the workforce. It kept increasing to a peak during the Clinton Administration (in the late 1990s) of just over 67 percent. That was a period of strong job growth; a very low overall unemployment rate (in the 4-percent range), which drew unskilled and marginally-attached workers into the workforce; and welfare-to-work programs that increased participation of low-income women.

After trending up slightly in the mid-2000s, LFPR has fallen precipitously since the recession began — from 66.2 percent in early 2008, to 62.8 percent in December 2013. There has been no net rebound since the job market started growing again after the recession ended.

The labor force participation rate is defined as the percentage of people who have jobs, or are actively looking for work (defined as having searched for work in the past four weeks), compared to all the potential working adults in the U.S. The latter includes all those not in the military or incarcerated. It includes adults age 16 years and older, including those who are retired and the elderly.

“There’s certainly a long-run trend here that is worrisome, in terms of how much people view there to be a positive payoff from participating in the labor force,” says Linda Barrington, director of Cornell University’s Institute for Compensation Studies.

Barrington and other economists have expected some decrease to occur in the LFPR over the past several years. That’s because Baby Boomers are retiring, and young people are staying in school longer — earning more credentials, trying to become more employable.

But, says Heidi Shierholz at the Economic Policy Institute, roughly 6 million people have dropped out of the labor force who otherwise wouldn’t have been expected to do so. Her research is based on projections made by the Bureau of Labor Statistics before the recession severely damaged the job market.

Half of these “missing workers,” as she calls them, aren’t young or old.

“There are 3.3 million workers of prime age — age 25-to-54,” says Shierholz, “people who are very unlikely to have gone into early retirement, people who are unlikely to be in school. They would be in the labor force, would be working, if job opportunities were strong. But they’re not.”

And Linda Barrington points out that, but for the poor job market (especially for older workers who are laid off and find it hard to find new jobs), more Baby Boomers might be remaining in the workforce now.

Barrington speculates that declining participation in the workforce is one reason middle-class household income is stagnant. More families are living on fewer paychecks. A slack labor market also keeps wages down for those who already have jobs or are lucky enough to land them.

“How can people even afford to drop out of the labor market?” she asks. “I think in some cases, it is a household decision that the wages you can make don’t cover daycare costs.”

Meanwhile, the decline in labor-force participation probably does not reflect individuals dropping out of the official economy and moving into the underground economy.

Anyone making money for work done under the table — being paid cash for odd jobs or day labor; earning undeclared self-employment income; or even making money from illegal activities — would be counted as “working.”

That is, assuming they answered the government’s household survey honestly. 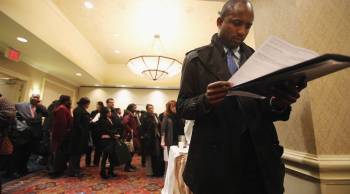