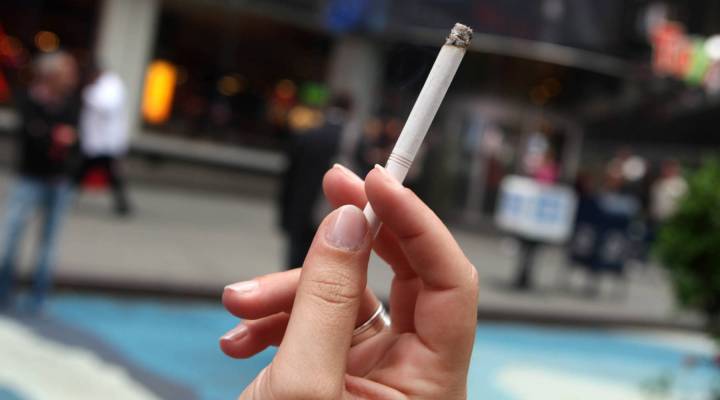 COPY
A woman smokes a cigarette in the pedestrian plaza located in Times Square May 23, 2011 in New York City. Daniel Barry/Getty Images

A woman smokes a cigarette in the pedestrian plaza located in Times Square May 23, 2011 in New York City. Daniel Barry/Getty Images
Listen Now

“In 1964, January 11, the word came out that smoking was bad for you,” says the acting Surgeon General of the United States, Boris Lushniak. Although it might be hard to believe that smoking being bad for you was ever really news, Lushniak says the report was a game changer. “Whenever I speak in medical meetings, I’ll discuss the fact that oftentimes at these medical meetings, people would be smoking,” says Lushniak. “There would be ashtrays on tables around us. Smoking in restaurants, smoking on airplanes, this was really a part of our society.”

In 1964, nearly half of Americans smoked. The AMC drama Mad Men is set in the 60s. In one memorable scene, Betty Draper is driving with her young daughter and actually offers her a cigarette.

Since the Surgeon General’s report was issued, 8 million lives have been saved by tobacco control measures, according to a report from the National Cancer Institute. Dr. Theodore Holford, professor at the Yale School for Public Health, was one of the study’s authors. He says it’s time to look to a new frontier in tobacco regulation.

“It’s sort of an interesting time that we’re going through right now,” says Holford. “The tobacco-related products that are being produced are very, very diverse these days.” He points to the booming market for e-cigarettes and smokeless tobacco.

Good old-fashioned cigarette smoking is on the rise overseas. China alone has 300 million smokers now, although the country is exploring a smoking ban of its own, and there’s still progress to be made in this country, says Dr. Stanton Glantz, director of the Center for Tobacco Control Research and Education at the University of California, San Francisco. He points out that more than 40 million Americans still smoke. “We still don’t have strong warning labels on cigarette packages, like almost the entire rest of the world has and we still don’t have a ban on menthol.”

Glantz wants to see a ban on smoking in movies, which studies have shown can encourage young people to smoke.

A new report on smoking is due out from the Surgeon General next week.