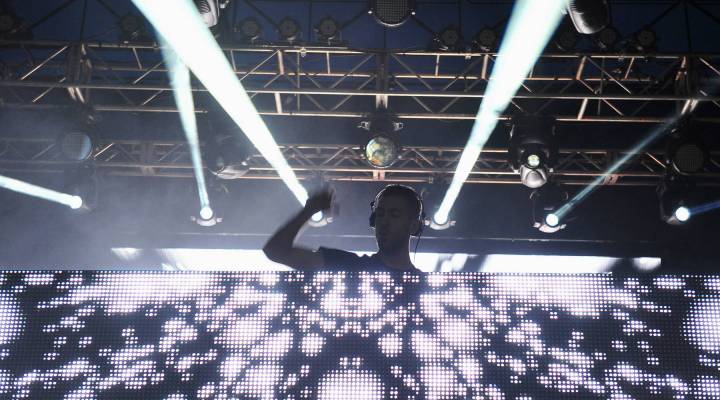 One of the most common questions we get here at Marketplace isn’t about the economy or government, but the music we play in between stories. Marketplace Money director Lindsay Foster Thomas, Marketplace Morning Report producer Justin Ho and Marketplace director Millie Jefferson share their favorite songs they played in 2013, and what goes into picking that perfect song that pairs with a story about the government shutdown or Apple’s new product release.

Check out our playlist of Marketplace’s favorite songs in 2013!

This year brought a lot of change to Marketplace Money.  Change … money … get it? 2013 was my first full year as director. We ramped up our social media outreach (shout out to our 1500+ Twitter followers @LiveMoney!), and this was the year Carmen Wong Ulrich settled in behind the mic to host the show.

With all that happening behind the scenes, online and on-air, two things about the show remained constant: Marketplace Money’s devotion to covering personal finance issues and our use of music to add to the show’s entertainment factor. The latter, we lovingly call our $oundtrack. Where does the $oundtrack come from? Mostly from my crazy music tastes, but there are several things I consider when picking a song for the show:

Is it a good song?

Obvi, right? This has nothing to do with its potential to crack the Billboard Top 40 — although pop music is popular for a reason. We only get to play 10 or 20 seconds of a song between stories, so if the tune is good because of amazing lyrics or its ability to get the party started when the beat drops, that’s not really going to matter for our purposes. I listen for strong instrumental breaks, unique beats, or frequent changes in rhythm that hold your attention until the song fades into Carmen’s voice or one of our show’s underwriters. But if it does get the party started, bonus!

Does the song speak to the topic at hand?

It’s always fun to pair a song with particular subjects, especially in personal finance. Personal finance is part of our life. Topics that fall under that category are also things artists have been singing about for years: Homes, work, hard times, etc. When there’s a chance to give a wink to our audience with a song, I usually take it.

Will people be happy to hear this song?

Most people listen to Marketplace Money on the weekends, while they’re cleaning their apartments or running errands with the kids. I think about that when I put a groovin’ song in the $oundtrack, one that I know will get folks to snap their fingers or sing along. Familiar music, by artists like Stevie Wonder or Queen or The Black Eyed Peas, is comforting and just the thing to make the weekend feel like the weekend.

Here’s a few amazing tracks I discovered in 2013:

It took about four seconds of this song for me to fall in love. I’m already a huge fan of Solange’s music — it’s not all about you, Beyoncé! — and this remixed beat made me immediately stop what I was doing. Solange repeats, ‘We can’t survive on love, baby,’ which made me think about the financial situations many of our listeners write in about. They have the foundation for great relationships, but something is lacking related to money. Whether you need to make more of it, communicate about it honestly, spend it smarter or keep it separate from your partner, this song is a great anthem for folks who have the love but need to get the money together.

I admit it, this song first came to my attention because its title and my initials are the same. Imagine my surprise when I pressed play and discovered an amazing tune that’s become one of my favorites to include on Marketplace Money.  “LFT,” or “looking for trouble,” is a song about getting older, but perhaps no wiser – something those who’ve faced the same kinds of money trouble over and over again can relate to. Hopefully our show is helping you stay out of those situations, but if you find yourself in a financial pickle, pump this jam as inspiration to figure a way out fast.

I could’ve just written one long love letter to Childish Gambino and his new album, “Because the Internet.” Childish, if you don’t know, is actor Donald Glover. I came to this artist in a weird way. Marketplace producer John Ketchum’s favorite insult for people is “childish.”  Seriously, he says the word every day 26 times a day. One day I google’d his signature insult (don’t ask me why) into a music search engine and boom, there was Childish Gambino just waiting for me! I have had this album on repeat for a couple of weeks now. Although it hasn’t been easy to find versions of his … rather explicit music to use on the air, the outro to the song “Worldstar” is one smooth groove.

It was a good year for Marketplace Money and music.  We hope you’ve enjoyed our $oundtrack selections and we resolve to keep discovering and playing more amazing music in 2014.  Happy New Year from Marketplace Money.  Because…you!

It Gets Dark by Holy Ghost!

I pretty much wear out anything from Peter Bjorn & John, Dujeous, Oddisee, 9th Wonder, Mux Mool,  Goldroom or Local Natives. But if you listen to Marketplace regularly, I’m pretty sure you heard this song in heavy rotation. This song is great out of pieces that need a jolt of music to follow them. This song has a nice ‘hot hit’ (a start without a fade up) and sounds firm and upbeat. It’s an attention getting song, which is one of the reasons I love it. I usually play this song as the first bridge. I think it says, “Hey, you! You’re listening to Marketplace!”

Pretty Boy (Peaking Lights Remix) was one of my favorite songs this year.  And like “It Gets Dark,” if you’re a regular listener then you heard this one a lot. Unlike “It Gets Dark,” I usually played this song at the end. The song has a nice upbeat rhythm and is great after the last story in the show. It works really well out of a piece that ends with the reporter, and those that end with the host speaking. When I hear it, it reminds me of a song that a movie might go end on — a song that can often close or punctuate the show.

“Day 38” is a song from a compilation called “50 Days for Dilla” by the Australian beat maker  Ta-ku. “50 Days for Dilla” is a tribute to American musical genius James Dewitt Yancey aka J. Dilla — one of my favorite artists — who passed away in 2006. I love this song because I can play it out of stories that are heavy in subject matter. It’s a nice song with classical piano and heavy hip hop beats, a combination that works well for Marketplace bridge music. It’s a song that, to me, sounds hopeful,  without sounding too happy or sad. It’s very versatile, which is why it ended up being one of the most played this year. Ta-ku is one of my favorite beat makers, another compilation of his worth listening to is “25 Days for Nujabes.“

A tout a l’heure by Bibio

I love Bibio, a lot of their songs are in heavy rotation on Marketplace programs. It’s an excellent song to fade under the end of a story and then have it hit right as it ends. To me it’s a song that signifies a page turn, it’s a song that helps move the show along.

God Made the World by Cold Cave

I love this song because it’s fast moving.  It works well anywhere in the show and it works well out of stories that were complicated to tell. I think its fast pace gives the listener time to digest what they just heard, while not letting them stay there for too long. It’s one of the songs that I go to if I feel like the pace of the show is slowing too much.

There are many more songs that I’m sure I played to death.  That happens when you have to pick music that not only fits with the Marketplace sound, but also fits the tone and texture of each individual piece and of the show as a whole. I can’t wait to see what 2014 brings!  I love suggestions,  you can always tweet them to me @eccoMillie or to the show @MarketplaceAPM.

I heard this on Breaking Bad, during that wonderful dead drop scene in the fourth season. The instrumental version is fun, neutral and isn’t that busy – qualities of any great music bridge.

I heard this on Travis Holcombe’s (excellent) radio show on KCRW. Nacey, a Washington, D.C.-based producer and guitarist of Misun, has a bunch of great tracks he makes available for free online. They’re action-packed and great on air.

This is a public radio standby. It has a great buildup and a “post” – a moment I want to hear once a piece ends (it’s that moment that happens at :23 seconds in). Sometimes I wonder whether it’s too ‘yoga-studio’ for morning radio. Possibly used best by Joe Frank in “The Box.”

Christmas music on public radio. Appropriate? Annoying? Overdone? This track solves it all.

The instrumental version of this track works well out of mostly anything. Little-known fact: the clip of our credit announcer reading “Marketplace” samples perfectly over this beat.