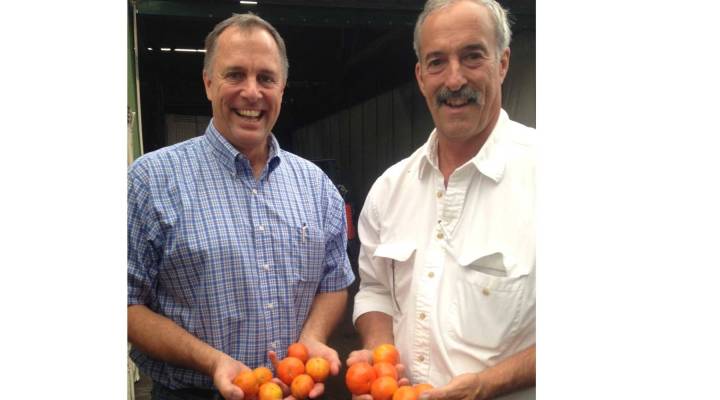 How Florida’s orange farmers are fighting back

COPY
Quentin Roe and William Roe run W.G. Roe and Sons, Inc. It's one of the largest tangerine operations in the country.  Stacey Vanek Smith/Marketplace

How Florida’s orange farmers are fighting back

Quentin Roe and William Roe run W.G. Roe and Sons, Inc. It's one of the largest tangerine operations in the country.  Stacey Vanek Smith/Marketplace
Listen Now

We’re coming to the end of orange harvesting season in Florida right now. The Sunshine State produces almost all of the orange juice we drink in this country, which is an impressive half a billion gallons a year.

But a virulent disease has been hammering Florida’s citrus groves and has pushed many farmers to leave the business or sell off their groves.

In Bartow, Fla., the Florida Department of Citrus is meeting to talk business and budgets. Everyone rises for the Pledge of Allegiance before the presentations begin.

It’s mostly bad news — for most of the past decade, Florida’s $9 billion citrus industry has been hammered by a disease called greening. Florida is now producing half the oranges it used to.

Greening infected trees stop being able to move nutrients from leaf to root. They starve to death over several years … as they decline, their leaves turn yellow and they often produce small, misshapen fruit.

Quentin Roe and his brother, William, run one of the largest tangerine operations in the country in Winter Haven. At their facility in Winter Haven, we’re watching thousands of tangerines come off of a conveyer belt. It’s been sorted for size and a lot of undersized fruit is being picked out.

“Here you can see this fruit is not any bigger than a golf ball,” says farmer Quentin Roe. “There’s just thousands and thousands of them coming out of these runs.”

W.G. Roe and Sons, Inc. can’t sell the undersized fruit on the fresh fruit market, so it gets taken to the adjoining juicing plant. William Roe shows me a row of stainless steel extractors, the size of industrial washing machines. These produce tens of thousands of gallons of juice a day. The size of the fruit doesn’t matter for juice, but taste does, and, says William Roe, greening affects that, too.

As they watched their product quality decline along with their profits, the Roe brothers took action.

At their prototype grove in Winter Haven, Quentin Roe inspects rows of young, hip-high tangerine trees wrapped in white plastic tubing. These are special fast-growing trees, planted close together and sprayed frequently. The Roes yank out anything that looks infected and scout regularly for signs of greening.

“This is the culmination of literally millions and millions of dollars,” says Quentin Roe. He says they’ve been able to keep greening out of these groves. And that, says Roe, is the industry’s only hope. “In the next 5 to 8 years, all the tangerine groves in Florida as we know them right now will be dead or non-productive.”

The Roe’s system has pushed the cost of caring for the trees from $1,200 an acre to more than $3,000. The brothers hope those costs will be offset by the premium customers will be willing to pay for full-sized, sweet fruit, which is getting harder and harder to come by.

While the Roes are spending millions of dollars to keep greening out, there’s another school of thought among Florida famers: living with the disease.

Maury Boyd has become something of a celebrity in the Florida citrus community. When greening first hit Florida, the state asked farmers to destroy infected trees, Boyd refused, earning him the nickname ‘Typhoid Maury.’

“The trees are infected and you’ll see symptoms, but the fruit looks good,” says Boyd, as he walks past Valencia orange trees at one of his groves near Winter Garden.

There are signs of greening all over Boyd’s Valencia grove, such as yellowing leaves, but the trees are heavy with baseball sized oranges.

Boyd started experimenting and eventually developed a treatment known as the ‘Boyd Technique.’ It involves showering trees with food and nutrients, literally.

“Picture this,” says Boyd. “We’ve got a high-blast sprayer blowing all these nutrients. It’s coming out 90 miles an hour. It’s kind of like eating six meals a day instead of three meals a day.”

Boyd says if you care for the trees properly, they can live with greening. But it isn’t cheap. Just like the Roes’, Boyd’s costs have tripled, but he’s able to make a profit because the price of oranges has gone up as the supply as declined.

Harold Browning is a botanist who has helped Florida citrus farmers battle diseases like canker and blight. He says greening is like nothing he’s ever seen and, although it’s good to see farmers innovating, he worries none of the solutions are economically viable in the long term.

“There is no good economical, sustainable, durable kind of management system,” says Browning. “So we’re building that on the fly.”

Browning says the rising price of Florida citrus has consumers backing away. We’re drinking 20% less orange juice than we used to. Browning thinks the only real solution is finding a cure to the disease, but after eight years battling greening, there’s nothing in sight.

Quentin Roe says his grandfather started this business and he and William are passing it on to their children. Bouncing through their groves at dusk in a work truck, Quentin and William say it’s about more than economics.