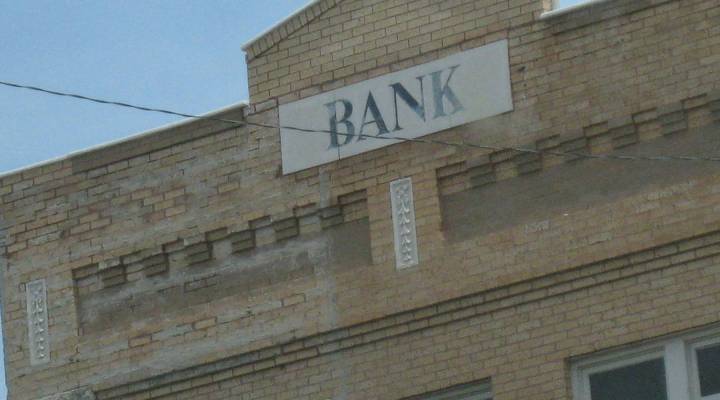 No banks have opened in 3 years … until now

No banks have opened in 3 years … until now

It’s no secret that the last 5 years have been tough on banks. A lot of new regulations have pushed up the cost of banking for many institutions. That cost increase was especially tough on small banks. In fact, no new banks opened in 2013… or 2012… or 2011… until just a few of weeks ago. The tiny town of Bird-In-Hand Pennsylvania was the only town in the US to see a bank open its doors in years.

The Bank of Bird-In-Hand sits at a remote intersection in Bird-In-Hand, Pennsylvania. There’s an open field next door and another one across the street. There’s a farmer’s market down the road. The bank itself is housed in an old stone home that used to be a doctor’s office.

“My office was the waiting room,” says Bill O’Brien, Chief Loan Officer for the Bank of Bird-In-Hand. He’s showing me around the space. “If you needed to give a sample or a specimen, you went into the bathroom here, but now it’s our vault.”

The bathroom vault isn’t the bank’s most unique feature, though. That’s out in the parking lot.

“We’re looking at the horse shed,” he says, pointing to a covered wooden structure in the parking lot. “Four stalls. It’s a nice place for them to park their horse and buggy to come into the bank.”

Bird-in-Hand is in the heart of Amish country. Here buses full of tourists and trucks loaded down with locally grown corn, eggs and tobacco share the highway with horse-drawn Amish buggies. The local economy is strong—it’s one of the most productive agricultural areas in the country. There’s a thriving tourism trade and a lot of small businesses. It seems like an ideal place to open a bank, but this isn’t the ideal time to open a bank.

“When I was asked to come and meet with them, I came with the idea that I was going to talk them out of doing it,” says banking industry veteran Brent Peters. He’s now the CEO of the Bank of Bird-in-Hand, but when he first met with organizers, he was a skeptic. He felt like the deck was stacked against small banks. Hundreds have closed their doors over the last few years. We now have fewer banks than at any time in US history. “Really, the environment was not friendly towards banking. The regulations were changing constantly. The cost of implementing those new regulations, there was no differential between Bank of America or bank of Bird-in-Hand.”

Peters became a convert when he saw how much support there was for the bank. It raised $17 million, all locally. “I’m not surprised by that support,” says economist and bank consultant Ken Thomas. “Smaller community banks, because they’re more in touch with their communities, are more apt to make the small business loans and the farm loans that we need.” In fact, they make nearly half of those loans. Meanwhile, big banks are closing rural branches.

I spoke to one of the Bird-In-Hand’s Amish customers. Members of the Amish community won’t be identified on tape because it goes against their values of modesty and humility, but, anonymously, he told me that having a local bank was a big deal to the community. “With the lending officers understanding the people locally, understanding the history of families, how it gets handed from one generation to the next. That is important to us, yes.”

Chief Loan Officer Bill O’Brien says to make agricultural lending work, you have to understand agriculture and to make it work in Amish country, you have to understand Amish culture. O’Brien’s been banking in this area for 25 years.  “We have a saying that when you want to go out and see and Amishman, you’ve got to go see him. But if he wants to see you, you’ve still got to go see him. So that’s how it is here. You’ve got to get out of the bank.”

O’Brien estimates about half of his business comes will be Amish.

Still regulations are regulations and Consultant Ken Thomas says compliance can cost a bank $250,000 a year. That’s no big deal for Bank of America, but it’s a very big deal for the Bank of Bird-in-Hand. Still, Thomas thinks Bird-in-Hand will succeed. “The people in Amish Country are going to be supporting their bank and basically taking their deposits out of the non-Amish banks and going to this bank.”

Thomas says small banks have an edge on big banks: loyalty. He says if they can tailor service to a community in a way big banks can’t, the community can serve them, too.