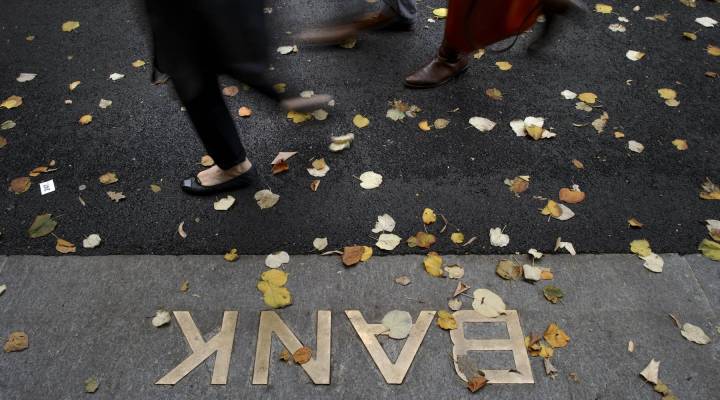 COPY
Pedestrians pass by an embossed Bank sign at the entrance of a branch of the Swiss banking giant UBS in Zurich. FABRICE COFFRINI/AFP/Getty Images

Pedestrians pass by an embossed Bank sign at the entrance of a branch of the Swiss banking giant UBS in Zurich. FABRICE COFFRINI/AFP/Getty Images
Listen Now

There was a time not so long ago when if you wanted to store money somewhere, no questions asked, you’d go to Switzerland. But maybe not so much anymore. Several Swiss banks have just announced that they will cooperate with U.S. officials in a crackdown on tax evaders.

But it’s not exactly the spirit of cooperation that has brought the Swiss banks to the table with the U.S. It’s fear. The U.S. is threatening to prosecute Swiss banks if they are found to be helping wealthy Americans avoid taxes. Tax evasion costs the U.S. government more than $300 billion a year.

Over the summer, the Swiss government and the U.S. government came up with a plan for banks that might be helping American clients evade taxes by storing money in offshore banks. About 100 banks are expected to comply with this plan by the end of the year.

The banks aren’t admitting any guilt, though. Many have said they think they’re innocent, but they’re not sure — and maybe they have an American client or two who maybe didn’t pay their taxes.

If it turns out the banks are holding untaxed income from Americans, the banks will hand over some information and pay a fine of up to 50 percent of the money they are holding for their clients if they are found guilty.

And if the banks don’t cooperate, the penalties are stricter. Several Swiss banks, including Credit Suisse are under criminal investigation in the U.S. If a bank is found guilty on criminal charges, they can have their right to do business in the U.S. taken away.

How Americans really feel about taxes