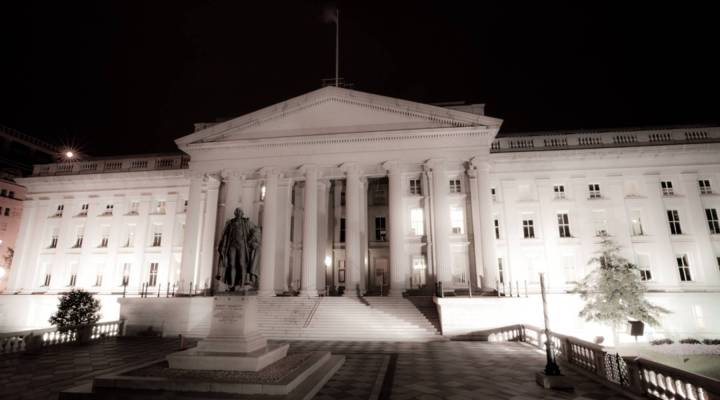 It’s not often the U.S. Treasury shakes things up. Like most government departments, it prides itself on being steady and predictable, an island of certainty in a turbulent financial world. That reflects in the bonds that it sells, all of which are backed by the full faith and credit of the U.S. government, and all of which come with a fixed rate of interest.

But next year, the Treasury is going to make a change, by issuing what’s called a floating-rate note. Investors appear to be keen on the idea of a government floater, but for the rest of us who might not understand why floaters are so appealing, we turn to Marketplace’s New York editor and resident explainer of arcane financial terminology, Paddy Hirsch. He says if you want to understand what a floater is, imagine yourself floating on a boat.

“When you’re sitting on the deck of your boat, sipping martinis or whatever you do up there, you are always a certain distance from the surface of the water. Let’s say five feet. But how far are you from the sea bottom?” Hirsch says. “The distance from the surface of the water to the sea bottom varies. One minute it might be one-and-a-half feet, another it might be three feet. But you’re always five feet on top of that, floating on the water.”

Still confused? Hirsch explains that in the same way you would be floating on your boat a varying distance from the ocean floor, the same would be true for this new type of government debt.

“Instead of being fixed at, say seven percent, these notes will come with an interest rate of, say, five percent that floats above a variable base rate,” Hirsch says. “So your total interest payment will move up and down as that base rate moves: five percent plus whatever the base rate happens to be.”

Hirsch says while the notes may sound complicated, they are actually quite commmon in the private sector.

“It’s very simple, and corporations use these kinds of bonds all the time. They usually use LIBOR, the London Interbank Offered Rate as their base rate — which was why the manipulation of LIBOR was such a big deal. In this case, the government will use the yield on the 13-week Treasury bill. If that rate goes up, then the interest rate on the floating rate rises too. If it goes down, the rate falls.”

And as interest rates rise, investors stand to make a lot of money. But Hirsch says that doesn’t mean they’re a sure thing.

“The holders of these notes will get paid more as interest rates rise — and with base rates at zero now, that will happen eventually,” Hirsch says. “But of course these bonds will come with the standard warning: down the line, if rates fall, you could lose money, and remember, these notes will adjust constantly, just like you on your boat.”