Ride-sharing vs. taxis: in many cities, the competition is on

Ride-sharing vs. taxis: in many cities, the competition is on

These are tough times to be a cabdriver. For more and more riders, black is the new yellow; they prefer summoning an Uber towncar with a smartphone, over calling for a taxi. Ride-sharing has expanded to dozens of U.S. cities. But taxis aren’t going down without a fight.

Imagine 60-hour workweeks, waking at 3 a.m. to spend your whole day navigating Los Angeles traffic, hoping to make $150, tops. That’s what Frances Nazarian does. She’s driven a cab for over a decade. She needs the money to help put her youngest daughter through Princeton.

She says she has the best job in the world. “I’ve had days when I think I’m on ‘Candid camera’ because everyone who gets in my cab is going on an $80 or $100 ride,” she says.

But ask what she thinks about ride-sharing services like Uber. “Well, obviously, I think they suck,” she says.

Nazarian says in her house, Uber has become a four-letter word. “My sister called and she’s like ‘Have you heard of Uber?’ I was like, ‘Your sister drives a taxi and you’re calling and saying how great Uber is? Could you just shut up?”’

Nazarian says business is slower since ridesharing came to town, but that’s not what bothers her. She says it’s the unfair competition. The likes of Uber don’t have nearly as many regulatory hoops to jump through. Unlike taxis, they can raise their prices during peak times. And they can pick and choose which rides they accept and which neighborhoods they go to.

“I guarantee I could get on the Uber app right now and call from where we are right now, South Central, and not one Uber driver would take that call, or Lyft or Sidecar,” she says. “Basically they want to work in the most affluent areas of town.”

Uber has been advertising for drivers in Los Angeles, promising they can make up to $60,000 a year. That’s twice what Nazarian brings home. So, would she ever consider switching over?

“Oh no. I’m so happy. I’m content with what I do,” she says. But the taxi industry isn’t so content.

Ridership has been declining all over the country, anywhere from 10 to 30 percent in cities where services like Uber have entered the market. Yellow Cab LA – by far Los Angeles’ largest taxi company – has 15 percent fewer calls coming in, after four years of double digit growth.

“Does that mean we’re in dire straits?,” says William Rouse, general manager of Yellow Cab LA. “Absolutely not. But it a cause for concern. We watch trends just like everybody else.”

“This organization in one form or another is an outgrowth of my family’s business,” says Rouse, who just ended his term as head of the national trade association that represents taxis. “And we’ve operated every hour of every day since 1937.”

When Uber came to town last year, Rouse focused his attention on trying to convince regulators to ban ride-sharing — what he calls “bandit taxis.” It didn’t work. California became the first state to regulate the services in September.

With few legal options left, Rouse has now turned his focus inward. “We’re committed to problem solving and improving the product and going out and marketing like we never have to rebuild the business,” he says.

A quarter of Yellow Cab’s calls now come from a sleek mobile app that looks suspiciously like Uber’s. But not all drivers are allowed to pick-up customers who use the app. First they have go through classes to improve customer-service skills.

It seems to be a direct response to the perception that, get in a taxi, and you’ll be met by a scowl, ride Uber, and the driver will ask what you want on the radio and hand you a chilled bottle of water.

As difficult as it is for him to admit, Rouse says ride-sharing is making taxis better.

“I’m not going to go and say that companies that go in and break the law have helped us,” he says. “But at the same time it is a good thing for companies to peel back the onion, look at the product, and improve their product.”

So would Rouse ever ride Uber, even just to know better what he’s up against?

He says he came close when he was away on a business trip recently. Then he decided he’d better stick with the local taxi. 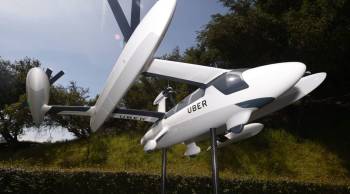