Following the money on the new IRS rules

Following the money on the new IRS rules

The Obama administration is making moves that would limit the political campaigning of certain tax-exempt groups. Proposed Internal Revenue Service rules would impact 501(c)(4) groups, much discussed in the last election cycle. Political operatives on both sides use them to spend big money from anonymous donors. If the rules go into effect, so-called dark money may have to find new ways into politics.

How? Let’s imagine a hypothetical donor, say, Count Dracula. (Feel free to imagine him as a Democrat or Republican, whatever fits your own political bias.) Imagine the Count is American and has been quietly funding a 501(c)(4) helping politicians who support tax breaks for fang maintenance and tariffs on garlic. If these new rules go into effect, Dracula could try shifting his money to a Super PAC.

“I would expect that they might be a more popular target for big donors who don’t fear media scrutiny,” says Sheila Krumholz executive director of the Center for Responsive Politics, a groups that tracks money in politics.

Super PACs disclose donors. That’s fine if you’re Sheldon Adelson or George Soros, two billionaires who publicly support causes on the right and left, respectively. But vampires are not big on daylight. Donors who want to give secretly would have to find other ways to give under the new rules.

Many election law observers expect the new rules would mean publicity-averse donors would move their money through 501(c)(6) organizations. These are trade groups, such as chambers of commerce. Political operatives could even try to work through more obscure sections of the tax code. Using a lesser-known vehicle like a 501(c)(19) group — typically used by veterans organizations like the Veterans of Foreign Wars — only sounds far-fetched until a clever election lawyer finds a way.

“A few years ago, nobody thought you could use a 501(c)(4) in a campaign context,” says Rick Hasen, election law and political science professor at the University of California-Irvine. “So it’s possible that you could try to use another one of these organizations.”

Count Dracula could also form an LLC, which might allow him to secretly fund a political group. Donations have always had a way of getting around new rules.

“Money will find its way into the system one way or the other,” says veteran election lawyer Ken Gross, a partner at Skadden, Arps, Slate, Meagher & Flom.

But let’s be careful not to say Dracula’s bad just because he wants to give anonymously. If you read the book, you know he made a fine roast chicken and generously shared his brandy. Not a bad guy to have around.

Libertarian critics object to many campaign finance regulations on free speech and privacy grounds. They point out that people may have good reasons to want to give anonymously, such as fear of harassment tied to their political views. There’s a fear that excessive regulations hinder political participation.

“It’s a bad thing to get carried away and make it hard for people to engage in political speech,” says Bradley Smith, a former Federal Election Commission chair and founder of the Center for Competitive Politics, a group that’s broadly skeptical of campaign finance regulations.

These rules are just a proposal at this point. The battle over them could last long enough to try the patience even of the undead. And if Dracula were a big money political donor, the loudest and most sinister laugh might come from his election lawyer. A complicated fight over campaign finance rules is great for the legal business. 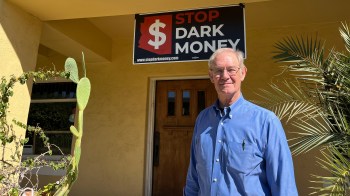 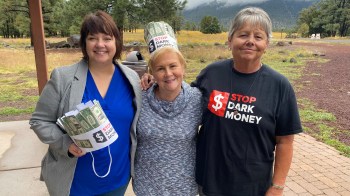