Hey, happy America Recycles Day.  Yeah, that kind of crept up on you, didn’t it?  Americans recycled more than 50 million tons of paper last year, which we all feel warm and fuzzy about, for sure. But is filling up your recycling bin worth it to your town?

Thomas Kinnaman, an economist at Bucknell University, has given this question a thorough look. And here’s the first answer: Recycling probably costs your town money.

“For every dollar you pay to take that waste to a landfill or to an incinerator,” he says, “you’re going to pay somewhere between $1.50 to $2 to recycle it.”

Which isn’t to say it’s a bad thing to do. He’s looked at recycling’s benefits beyond the city budget. Like the landfills that aren’t being filled. And the energy saved by recycling a beer can instead of refining aluminum.

“These external benefits are actually very substantial,” he says. As in: They do make recycling a good deal for the planet, even if it’s a money-loser for cities.

People like that. He’s done surveys. Americans are willing to pay to do some good.

But it can be overdone. He says the optimal recycling rate is just 35 percent.  After that, the costs pile up faster than the benefits, even the green ones.

“So, we might have a better planet at 100 percent, but we’re devoting a lot of resources to getting there,” he says, “and those resources might be better spent doing something else.”

Even if cities don’t recycle at all, no big deal.

Adam Minter is the author of the new book “Junkyard Planet,” about the global recycling industry. According to him, our empty Coke cans are a drop in the bucket. Only 15 percent of recycling in the U.S. comes from households.

“Most of the recyclables are coming from utility companies and from factories,” he says. “And there’s giant economies of scale. You might have a couple of pounds of recycling in your home. A utility company  pulling down power lines is going to have thousands of tons.”

And none of this activity needs to be subsidized. “No one is going to pick up someone’s garbage for free if there’s nothing in it for them,” he says.

In other countries, people look at recycling the way some of us look at garage sales — as a way to pick up spare cash for something you’re not using. Really, it’s more like picking up money that’s just lying there. You’d be nuts to pass it up.

“In China even the wealthiest families will still call up the recycling peddler from the street,” Minter says, “and sell them the cardboard from their new television.” 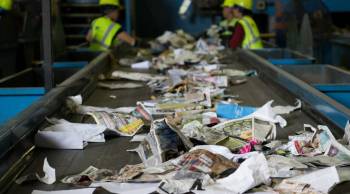